Rex Stout's Over My Dead Body 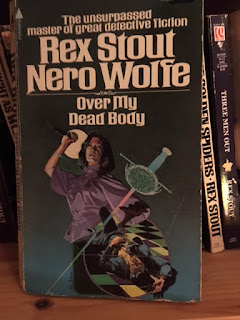 I've read all the Nero Wolfe mysteries at least once, and I started last year rereading them in order. So, I guess you can say I'm a fan. This one strikes me as particularly strong.

I'm very impressed with how much Stout achieves just in the first few pages. Nero and Archie are still fairly new creations, and they're reintroduced succinctly and amusingly. The client--or is she?--is sketched quickly, even without her name, which may or may not be her real name, and isn't given for several pages.


"'Pliz,' she said, 'I would like to see Misturr Nero Wolfe.'
Or you might have spelled it plihz or plizz or plihsz. However you spelled it, it wasn't Middle West or New England or Park Avenue or even East Side. It wasn't American, and naturally it irritated me a little."


There's also a bit of byplay involving a book that seems like it might be just standard chaff by Archie of Nero, but isn't. Shortly after that there's an FBI agent who introduces another bit of something to wonder about, and before long there's a body.

There are agents of foreign governments, a second body, and Nero never leaves the house in this one, though he's invited to a couple of times. It moves along nicely.

The other thing that struck me particularly about this novel is that it came out in 1940, and is very much a novel of its year. The emphasis on Americanness above, the foreign agents, and the concern over what's happening in Europe. This is the novel that reveals Nero Wolfe's Montenegrin ancestry, and troubles in the Balkans are probably in everybody's mind.

I never need a reason to read Rex Stout, but this does qualify for the Golden Age Mystery Scavenger's Hunt. There's a couple of brunettes and a dead body on the cover, but for now I'm using it for the knife, the weapon of the second murder:

"'The weapon?'
'Hasn't been found. He was stabbed in the left breast with a blade long enough to reach the heart, and it was withdrawn in a few minutes, but not immediately, judging from the amount of bleeding.'"


There it is. Long enough to reach the heart.