"I will begin by speaking of my childhood, which is the symbol, so to say, of my whole life, since my love for painting declared itself in my earliest youth." 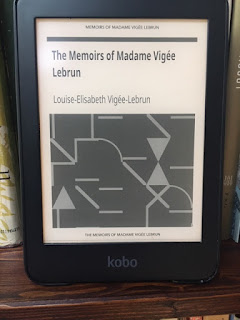 Elisabeth Vigée was born in Paris in 1755 to Louis Vigée, a provincial portrait painter who encouraged her love of painting. "I made a picture by lamplight of a man with a beard...When my father saw it he went into transports of joy, exclaiming, 'You will be a painter, child, if ever there was one!"
Unfortunately he died when she was twelve, and her mother remarried a jeweller, who did not encourage her, but did take any money she made as a painter. "I detested the man."
To get out of her hated stepfather's house, she married the art dealer, Jean-Baptiste-Pierre Le Brun, in 1776. Le Brun encouraged her painting, but now her husband took all of her money instead of her stepfather. He was a successful enough dealer--later he was instrumental in making the Louvre into a public museum--but he was also a compulsive gambler, and no amount of money could do much to keep him afloat.
She was, however, starting to succeed in a big way. She painted Marie Antoinette, and the queen liked the portrait, so there were several more, also the king, with or without the children.
In a few years though, being Marie Antoinette's preferred portrait painter was not particularly a recommendation with the public. She threw a toga party, and there was a rumor going round that it had been financed by the state to the tune of twenty-thousand francs. (She claims she spent fifteen and used a few old bedsheets. Since my idea of a toga party is more Animal House than Trianon, I guess I believe her...)
As the Revolution began to get hot, she decided to leave France. In 1789, the royal family was arrested, and she fled with her daughter (but not her husband) to Italy. It was the beginning of thirteen years of exile. She was abroad ostensibly to study the great masters of painting--and she did--but it was also safer. After Italy, she went to Vienna, to Saint Petersburg, to Moscow, to Berlin. She was commissioned to paint Catherine the Great (and did paint her granddaughters) but Catherine herself died before the portrait was begun. Only in 1802 was she able to safely return to France. She made later trips to England (which she didn't much like) and to Switzerland.
She wrote these memoirs in the later 1830s, when she was in her early 80s, her husband and daughter both dead by then. They're pretty fascinating, though it's true (and occasionally exasperating) that she never met an aristocrat she didn't like. I've seen her paintings in various museums.
The memoir is available on Project Gutenberg, translated by Lionel Strachey, the brother of Lytton. I first learned of its existence from Mudpuddlesoup.
Posted by reese at 10:24 PM No comments:

Back from two and a half weeks in Spain. We flew into Madrid, but were mostly in the inland south.

Finally got to visit the Alhambra, which I was prepared to visit two years ago:

Úbeda:
Córdoba:
It's nice to be able to travel again.
I finished my spin book, The Memoirs of Mme. Vigée-Lebrun, and should write about it soon.
Posted by reese at 11:48 AM 2 comments:

The Gates of Europe: A History of Ukraine 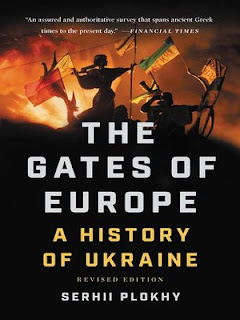 Serhii Plokhy's The Gates of Europe: A History of Ukraine is a history both of the land occupied by the contemporary nation of Ukraine, but even more of the people who are Ukrainians. It covers 2500 years ending with 2020 in the revised edition. (The revised edition came out in 2021.)
Especially now it made for a pretty fascinating read.

The history begins with Herodotus, which any history that justifiably can ought to do. 😉 The area was not then inhabited by Slavic speakers, but Cimmerians and Scythians, who spoke Iranian languages. Plokhy also makes use of Procopius' history, to discuss the area's relation to Byzantium, but he mostly moves over this period pretty quickly.

Slavic speakers first move to the area as part of the migrations caused by Attila the Hun. (5th or 6th century.) As the power of the Huns wanes, a new state, Kievan Rus' is established covering most of what is now Ukraine, Belorussia, and European Russia. Kyiv is the capitol. The nobles, led by the Rurikid dynasty, are a mix of Vikings and Slavs; the people, mostly Slavs. It reached its political apex under Yaroslav the Wise (978-1054).

It seems the word Rus' (the basis of Russian) comes (via the Finns) from the Swedish word 'ruotsi' used to describe the Vikings as the 'men who row.'

Yaroslav partitioned out the kingdom to his three eldest sons. Plokhy compares this division to that of Charlemagne. Like Charlemagne, Yaroslav did it to prevent inheritance squabbles among his sons, and it succeeded about as well as Charlemagne's attempt did. (That is, not at all.) New successor kingdoms were the result. These fought among themselves and tried to work with their more powerful neighbors (the Khazars, Byzantium). The word Ukraine first appears in the historical record at this time (in the 1180s). Then everything was swept away by the Mongol Horde in 1240. This was the beginning of differences between the various east Slavic states though none of them exactly correspond to three current ones. (Belarus, Ukraine, Russia).

Two east Slavic vassal states are formed in the aftermath of the Mongol invasion. One is Muscovy, with its capital Vladimir (near Moscow) and is the area around Moscow. The other, Galicia-Volhynia, was centred in Kyiv but moved its capitol to Kholm (now Chełm in Poland) and occupied the area of what's now western Ukraine and eastern Poland. The two vassal states received different treatment; the Muscovy state, closer to the Mongol heartland was more oppressed; the Kholm state was allowed a looser rein.

In 1323 the last male heirs (grandsons of the founder) of the Galicia-Volhynia dynasty died. The Mongols were a bit weaker. Galicia was taken over by the Polish kingdom; Volhynia by the Lithuanians. 1386 marks the beginning of the joining of Poland and Lithuania in a commonwealth. But the administration of the two areas remains separate. Plokhy thinks this is the beginning of a separate identity for Belarusians and Ukrainians.

The Cossacks begin as a sort of peasant rebellion in what is now eastern Ukraine, but in 1648 Bohdan Khmelnitsky creates a state (the Hetmanate) out of Polish-Lithuanian lands in what is now eastern Ukraine. Plokhy doesn't play down the pogroms that have left Khmelnitsky as little more than a swear word in Jewish history, but he did create a sort of Ukrainian state. But by 1780 the Hetmanate been absorbed into Russia. Western Ukraine is split between Austria-Hungary (Lviv) and Russia (Kyiv) during the partitions of Poland.

There's an attempt to set up a new Ukrainian state in the immediate aftermath of World War I, but it doesn't last, doesn't really even get on its feet.

Plokhy discusses the state of education in the Ukrainian language in the various jurisdictions as one of the formative elements of a Ukrainian identity. The ability to use one's native Ukrainian in a public setting comes and goes at the political whim of the various powers. For instance, Austria-Hungary at one point trying to beat back Polish nationalism allows schools to use Ukrainian. Later to placate the Poles, Ukrainian is no longer taught.

Plokhy makes a good case for a Ukrainian identity, which is, of course, like anybody else's, only strengthened by persecution. In the 19th century a number of nationalities were finding their feet; Plokhy does suggest that the Ukrainians were a little late in finding theirs, though they did not really have a state of their own at any point in the 19th century.

I felt like I learned a lot from the book, especially in the time frames that were more obscure to me: the Middle Ages in Slavic lands. Looking at Plokhy's list of publications on Wikipedia, (he's now a professor at Harvard) it's clear one of his real interests is the formation of Ukrainian identity, and I found that the most interesting part.

This is a book for a non-specialist reader. (Like me!) It reads well, but it does cover 2500 years in 360 pages, so there are a few places where it felt a bit thin--World War I, for instance. Still. Full of fascinating and timely and suddenly--unfortunately--much more important things to know. Recommended.