"...that indefinable smell of Berlin in March..." 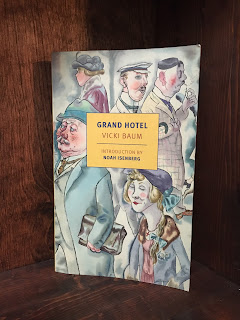 An aging Russian ballerina, an unimaginative company director, a stenographer who also does nude photos, an impoverished baron doubling as a thief, a bookkeeper with a fatal cancer diagnosis, a morphine-addicted doctor whose face was destroyed in World War I--they're all staying in a grand Berlin hotel.
That sounds like a series of character sketches, which is, according to the introduction, the way Vicki Baum first began to think about the novel, but she's worked out a plot that brings them all together. There's love, there's death, there's fortunes won and lost--or are they? The meeting of Grusinskaya, the ballerina, and Baron Gaigern (Greta Garbo and John Barrymore in the movie!) is both delightful and amusing.

The novel--or the characters at least--affect a certain cynicism about love: the stenographer Flämmchen (what a name! Joan Crawford in the movie) tells Baron Gaigern, "True love? There's no such thing," and says of the sexual act, "It was like having a tooth filled by a singularly incompetent dentist." Gaigern himself is quite calculating about love, until, maybe, he isn't. The novel itself is less certain about that cynicism, but still a little cynical. Do unexpected characters fall in love? "No," says the third-person narrator. "Life is very far from producing such delightful surprises." Yet, even so, some hearts might be warmed.

Closer to the feeling of the novel is a concern for money. Kriegelein, the bookkeeper, says at one point, "Only with money can you begin to be a decent human being." Which room you're in, what clothes you wear, career choices and life choices. All the characters think about money, and a possible corporate merger is one of the main plot threads.

It ends--but no spoilers!--with a big scene that involves all the major characters, even if one has already left town. Very enjoyable. 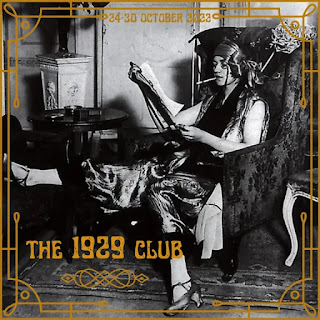 Over the years, I've posted a couple of other 1929 volumes on the blog:
Gladys Mitchell's The Mystery of the Butcher's Shop, 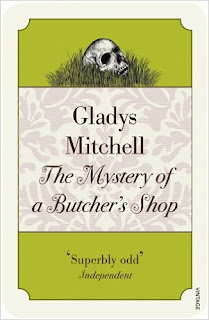 and Mateiu Caragiale's The Rakes of the Old Court in the Sean Cotter translation. 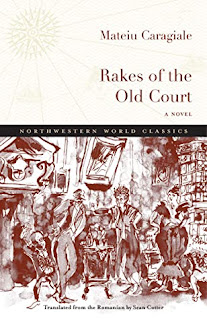 Brona's post about her 1929 book reminds me that the A Room of One's Own is actually a 1929 book as well, though the lectures were given in 1928. My thoughts about it here.
Thanks to Simon and Kaggsy for hosting!
Posted by reese at 7:56 PM 12 comments:

Oliver Goldsmith's The Vicar of Wakefield

"...a very discreet and serious dialogue upon virtue..." [Chapter 9] 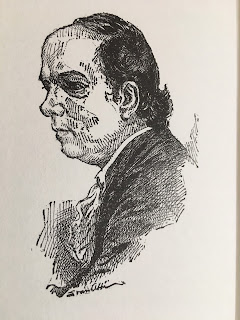 Well, nah.
Charles Primrose, the Vicar of Wakefield, is a good person who suffers great losses which are then restored to him in the end. You may remember this as the story of Job. I just reread the Book of Job to go with this, and the events of Job's story in the Bible take about as long as this paragraph. The rest of that book is indeed a discreet and serious dialogue about virtue (and God and sin and some other Very Important things.) But Oliver Goldsmith subs most of that out for some humour and romance...

We first see Dr. Primrose in a disputation with his fellow vicar, Mr. Wilmot, on the eve of George, his eldest son's, marriage to Wilmot's daughter. The dispute becomes so heated that the marriage is broken off. Well, that, and that, at the same moment, Primrose discovers his scoundrelly agent has absconded with his fortune.
It will be necessary for the Primroses to retrench.
George heads out into the world to make a living. The rest of the family move to a smaller place where they will be able to grow their own food to help out. In the course of moving, Sophia, the younger daughter, nearly drowns crossing a river, but is rescued by Mr. Burchell, and there's nothing like a rescue to make a girl take notice. Burchell will now be involved in their lives. For good? For ill?
They rent their new living quarters from Squire Thornhill. Thornhill has a bad reputation, but seems nice; Mrs. Primrose is determined that Olivia, the older daughter, should catch his eye. This requires new clothes, which requires money, which they don't have. Moses, the second son, is sent to the fair to sell one of their two horses, but is deceived by a conman. The other horse must be sold as well and Primrose himself goes to the fair where he is deceived by the same conman.
They run into George; he has not made his way in the world. (He almost became an actor. The horror! I believe Goldsmith--also a playwright--is being a little ironic here...) Thornhill loans the money to buy George a commission, but as soon as George is out of the way, Thornhill has Primrose thrown into debtor's prison, and seduces Olivia, who's willing because she believes it an elopement.
Primrose in debtor's prison is pretty much the same man he'd been all the way through: patient, helpful, trying to improve lives of the people around him, his parishioners and now his fellow inmates. And maybe also a little ridiculously, dangerously innocent? But that goes with goodness.
But. I did mention this often gets compared to the book of Job, right? By reforming the right person in the prison (that same conman) and with a little (well, a lot) of outside help, Primrose's life and fortune and restored. A sort of well-intentioned goodness makes everything right in the end. Which is what you wanted to hear, isn't it?
Anyway, while it may well be a 'dialogue upon virtue', it's a funny and engaging one, not discreet and serious at all.
It went on to become a pretty famous book. It shows up in Middlemarch, in Frankenstein. It's one of the few books young David Copperfield has left from his late father's library. It's the only thing other than agricultural reports that Robert Martin, Harriet's intended in Emma, has read. And once Jo (Little Women) has put Great-Aunt March to sleep by reading devotional literature, "I whipped The Vicar of Wakefield out of my pocket and read away, with one eye on him, and one on Aunt. I'd just got to where they all tumbled into the water, and forgot, and laughed out loud." But even Great-Aunt March comes to like The Vicar of Wakefield.
So...maybe it's a classic?

"The Old West had been settled by dreamers, great-hearted adventurers who were unpractical to the point of magnificence; a courteous brotherhood, strong in attack but weak in defence, who could conquer but could not hold." [58] 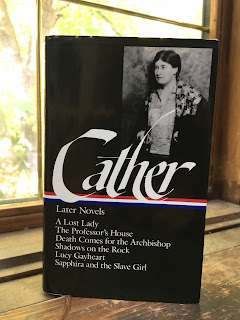 Willa Cather's A Lost Lady came out in 1923. It had previously been serialized in Century Magazine, and when the novel was issued by Knopf in book form, it was Knopf's largest print run to that date. Which then sold out, and required two more printings within weeks. It was a hit.
The lady is Marian Forrester. She married an older man, Captain Daniel Forrester, a successful railway contractor in the Western United States. They settle in Sweet Water, Colorado, a town on the railroad where Captain Forrester has built his dream house. The story of their courtship is told near the end of the novel.
Marian is mostly seen through the eyes of Niel Herbert, who grows up as a boy in the town. He's nephew to Judge Pommeroy, the town's lawyer, and as a young man goes east to study architecture. He's fascinated/half in love with Marian Forrester already from his boyhood.

"But we will begin this story with a summer morning long ago, when Mrs. Forrester was still a young woman, and Sweet Water was a town of which great things were expected." [6]

Niel Herbert is just a boy, off fishing--or horsing around and only pretending to fish--with his friends. That first scene includes a bit of horrifying cruelty to animals, the sort of thing boys are reputed to do, but much worse than pulling the wings off flies, and our novel's villain is identified.

The novel covers a number of years, and while Cather is coy about dates, that first scene is likely around 1880. The transcontinental railroad has just been pushed through Colorado. Captain Forrester is a successful, and still vigorous, man.

Later Captain Forrester has a horse-riding accident and can only walk with a cane; a bank for which he's a principal fails; he honourably makes good on the bank's debts, but at the cost of his own fortune. This must be the panic of 1893.

Later still Captain Forrester has several strokes and, with the money gone, it's up to Marian to take care of him. She does it, she probably even still loves the Captain, but she tells Niel, "I feel such a power to live in me, Niel." [70] She drinks too much, she has an affair with Frank Ellinger, a man she knew before her marriage, ends up drunk-dialling Ellinger, in Niel's presence, when she learns Ellinger has married. Is she lost?

Great things may have been expected of Sweet Water but they don't come off. Judge Pommeroy's business stalls, and he's not the only lawyer in town anymore: that villain mentioned above has become a lawyer:

"'...rascality isn't the only thing that succeeds in business.'
'It succeeds faster than anything else, though.'" [69]

Eventually Captain Forrester dies. Marian returns to California, and Sweet Water's lady is lost. The last Niel hears of her, the last we hear as well, is that she's remarried and living in Argentina.

"Long, long afterward, when Niel did not know where Mrs. Forrester was living or dead, if her image flashed into his mind, it came with a brightness of dark eyes, her pale triangular cheeks with long earrings, and her many-coloured laugh. When he was dull, dull and tired of everything, he used to think that if he hear that long-lost lady laugh again, he could be gay." [39]

But who or what is it that's lost? Maybe she did laugh in Buenos Aires.

It's a pretty great novel, I think.

It seems F. Scott Fitzgerald thought so, too. He read it while he was working on The Great Gatsby, and after Gatbsy came out (1925) he wrote a letter to Cather saying how much he admired A Lost Lady, and hoped she wouldn't think he'd plagiarized it to produce Daisy Buchanan. Cather wrote back to say she admired Gatsby in return, and no, she wasn't worried about it. (Frankly, while Gatsby is amazing as a whole, I find Daisy Buchanan thin beer in comparison to Marian Forrester.)

If you've read it, what did you make of the 'lost' of the title?