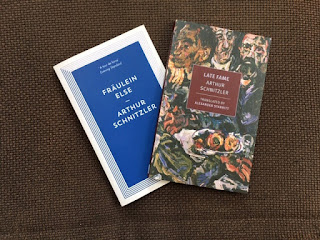 In Late Fame, Eduard Saxberger is an unmarried civil servant in Vienna; he's approaching seventy. His life is quiet, but he has a few friends he meets regularly at his favorite restaurant.

Forty years ago he published a book of poetry The Wanderers which sank without notice; but in the 1890s, young poet Wolfgang Meier finds the book again, loves it, hunts down the aging Saxberger, and draws him into his circle of young literati. Late Fame has come to Saxberger.

At first it's nice. None of his restaurant regular friends knew he once had aspirations to poetry; he scarcely believed it himself anymore, but now Meier and his circle are telling him he's inspirational. Fräulein Gasteiner, the actress in the group, flirts with him, and the circle organize a reading and wouldn't he write something new to be the star of the evening?

Of an earlier draft, Schnitzler wrote in his diary, "...end not sad enough." You'll have to see if you think the end is now sad enough, but it's not as sad as it possibly could be, and there's definitely humor in the middle parts.

The novella was written at the time it was set for a weekly magazine Die Zeit (not connected as far as I can tell to the current German newspaper) but it was deemed too long for that and so it never appeared while Schnitzler was alive. His papers were rescued with the help of the British embassy in the aftermath of Anschluss; otherwise it would have been lost. It came out in English in 2015 and is translated by Alexander Starritt with an afterword.

Else is a nineteen-year-old girl staying a vacation spot in the Italian Alps; she's chaperoned by an aunt and her cousin is also present, but her parents are at home in Vienna. A nice life, right? Well, not entirely.

A letter arrives from her mother--written at the instigation of her father--asking Else to ask Herr von Dorsday for money. The situation is desperate; her father, a society lawyer, has been caught pilfering from a trust he administers in order to feed his gambling habit; if the money isn't restored in a few days, he'll be taken up for embezzlement, which means dishonorable jail or an honorable-ish suicide. Hours later a telegram comes from her father saying even more money is needed.

Herr von Dorsday is ostensibly a friend of her father, if her father still has any friends; his gambling compulsion and consequent need to sponge is well-known in Viennese society. And worse, what everyone knows, including both Else and her father, is that Herr von Dorsday is an old roué, who can't keep his hands off the girls. Does her father want Else to ask because it's an emergency and the personal touch is better? Or does he figure the 'personal touch' is better and it's Else who will be touched?

The novel is told in stream of consciousness--Else's--and it follows every twist and turn of her thought throughout this impossible situation she's been thrown into. I found it very convincing, but also very painful. So, though it's impressive, you might want to be sure to save it for a moment you can bear to read such a thing. It is timely, though, as Harvey Weinstein (hopefully!) is going off to jail.

The novella came out in German in 1924. My copy is from Pushkin Press and is translated by F. H. Lyon.

Collected Arthur Schnitzler on the blog. 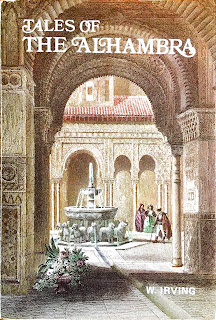 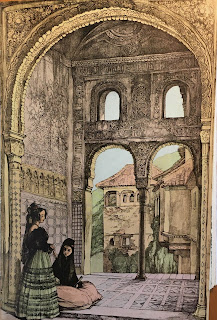 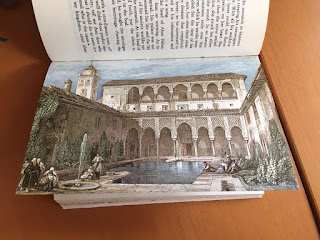 Poem For A Thursday (#Dewithon20 edition) 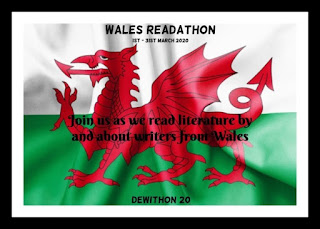 
Job Davies, eighty-five
Winters old, and still alive
After the slow poison
And treachery of the seasons.

Miserable? Kick my arse!
It needs more than the rain's hearse,
Wind-drawn, to pull me off
The great perch of my laugh.

Mowing where the grass grew,
Bearded with golden dew.
Rhythm of the long scythe
Kept this tall frame lithe.

What to do? Stay green.
Never mind the machine,
Whose fuel is human souls.
Live large, man, and dream small.

"Grumpy old clergyman, sour old sod," is the description of Thomas at this link from the Guardian, but the author also made Thomas' Collected Poetry one of his ten best Welsh books. 'Lore' is from his 1961 book Tares. Here's another of my favorite Thomas poems.

I got that Guardian link from Paula's organizing post for her Welsh readalong Dewithon, which is full of other great resources.

Jennifer is featuring a poem by Kim Addonizio this week.