Carolyn Keene's The Quest Of The Missing Map 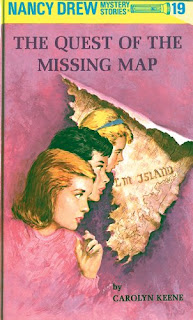 The Quest of the Missing Map is the 19th Nancy Drew mystery. I saw it recently in a local Little Library box, and I'll return it once I've finished this review. This copy sold somewhere once for a dollar, and once belonged to a girl named Debbie who had a green marker.

The missing map will lead to a treasure, of course; half is in possession of Ellen Smith, the daughter of Tomlin Smith, who survived the shipwreck of his father/captain's ship, but not before he got half a treasure map. The other half was in the possession of Tomlin Smith's non-identical twin brother, who will need to be found.

In the setup we learn a little bit about Hannah Gruen, the Drew family housekeeper. Before she came around to raise Nancy she'd worked as a housekeeper for Ellen Smith, which is the connection the brings Ellen Smith to Nancy.

The heirs of the twin brother turn out to be located conveniently close to River Heights; Nancy Drew, naturally, discovers them. There are also two competing groups of thieves also after the treasure map (both halves) who know of their rivals, but are in competition. Nancy must escape their clutches, with the help of her boyfriend Ned. In the end both halves of the map are reunited, and they set sail for the island in the South Atlantic where the treasure is, plus also a grand finale.

It was pretty satisfying. I didn't remember any of this one, and I don't remember whether I'd read it before. It's possible I didn't. A friend of a friend had a complete collection, and I always envied that friend, because she could borrow them from her friend, and read them all. I didn't have them all, or access to them, and I either had to buy them with my allowance, or try to get them (impossibly) from the library. After more years than I care to think about, I can still remember significant parts of The Old Clock, or The Twisted Candles, or Pine Hill, but I don't remember this one, and I just don't know whether I read it at the time or not. (I allowed my parents to give away my childhood mysteries and my Legos, and every now and again I regret it, especially the Nancy Drews and the Trixie Beldens.)

Pretty satisfying, but not perfectly. Nancy ends up kidnapped (though she escapes!) and half the map is stolen, both events occurring because she acts in a way that's not as clever as she usually is. I always find that annoying: when tension is created by your hero acting stupidly. Even heroes will act stupidly, of course, but still...Vic Warshawsky should have known the thugs had tracked her to that warehouse, and Nancy should have known that message was a trap. Oh, well.

And while I'm sure I wouldn't have cared when I was a child, now I'm troubled by the amount of time it would take to sail a yacht from New York to an island in the South Atlantic. Can even college kids just disappear for that amount of time? As I said, oh, well. Was this one slightly inferior, or do I just not remember all that well anymore? I don't know.

This was one of the rewritten versions and dates from 1969, which makes it Silver Age. The rewritten ones are mostly the versions I read as a kid. I was totally unaware of the difference at the time, but I now think one or two of the ones I had were the older editions: it was Nancy Drew that lured me into the dangerous (to me) habit of haunting used bookstores. When once I realized I could get a Nancy Drew I'd never read for a dime (if I was lucky) at a used bookstore when a new one might cost me two dollars of my all-too-limited allowance! (I forget the exact values.) Well. My life has never been the same.

I could use this for a blonde (Bess) or a brunette (George) or, were it a category on the challenge card, titian-haired (Nancy) but I'll go for the map of the title. 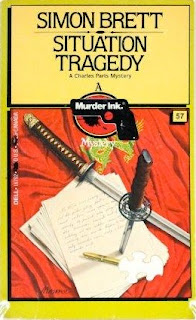 Situation Tragedy is the seventh (1981) in Simon Brett's series of Charles Paris mysteries. Paris is a not very successful English stage actor who happens upon dead bodies much more frequently than any normal human being should. Or about par for an amateur detective. This outing, for example, has four.

Paris has been playing a barman, a recurring character, in a television comedy, and in a new spinoff, his role looks to be more important (though still not that important) and Paris can always use the money. The new show, called the Strutters, for the married couple who are the headliners, seems plagued by accidents: first, an objectionable production assistant dies, falling off a fire escape, then the director drives his car off the road, the scriptwriter is killed in a hit and run, and then finally the floor manager is killed by a falling light stand. You, reader, will have no difficulty in imagining this as a series of murders. Nor does Charles Paris. The police are surprisingly indifferent, however, even to the hit and run. You'd think they'd at least bring out the occupational safety division.

By this time the Charles Paris series is well established, various recurring characters make a passing appearance: his ex-wife, Frances, his lackluster agent, Maurice Skellern, his successful lawyer friend, Gerald Venables, and alcohol, particularly Bell's Blended Scotch. None plays a particularly important role in this one. The story moves along nicely enough, and gives Brett the opportunity to satirize television and television types, though some of the jokes seemed obvious. I found the red herrings fairly unconvincing, but the conclusion I thought quite successful, with just a bit of a complication at the end. Charles Paris has to read an obscure series of Golden Age mysteries to solve it. In short if you like the Charles Paris series, you'll find this a good one.

The last murder had it occurred would have involved the samurai sword on the cover. I'm not entirely sure what the knife with the elaborate guard has to do with the plot. But as it is, I'm going to claim the handwritten papers for this cover; looked at closely, they seem to be extracts from that obscure Golden Age mystery writer.

It also counts for My Reader's Block Mount TBR Challenge.
Posted by reese at 9:19 PM No comments:

The Boss of this book by Mike Royko is Mayor Richard J. Daley of Chicago. The book came out in 1971, when the first Daley had been mayor for 16 years, and Royko was a reporter for the Chicago Daily News.

Some quotes, for instance on nepotism:


Nobody in the Machine is more family conscious than Chairman Daley...Uncle Martin Daley had a well-paying job in county government he did so skillfully he seldom had to leave his home.

Daley didn't come from a big family but he married into one, and so Eleanor Guilfoyle's parents might very well have said that they didn't lose a daughter, they they gained an employment agency.


Then down to the clerical job at City Hall for more learning. The first lesson is always the same: never repeat what you see or hear, or somebody might get indicted.

[An old friend of Daley's Louis Wexler says of Daley:] "Even then, he misused the language so that you noticed it. He had trouble expressing himself and his grammar wasn't good." But thirty years later, Daley's grammar was good enough to say "yes" when Wexler appealed to their old school ties, and Wexler became a judge.

Daley's moral code was emerging: Thou shalt not steal, but thou shalt not blow the whistle on anybody who does.

Or on race relations in Chicago:


If the Negro was equal in the eyes of the law, the men wearing badges needed glasses.

I quote Royko primarily because at this point the main virtue of the book is its style. It was meant to reach an audience, and so it has no footnotes, it doesn't much bother with citations in the text, it's even vague on dates, though it's roughly organized by Daley's terms. It's not much use if you want to learn anything about Richard Daley, who for better or worse is now history.

As an example, Royko writes about the Richard Daley objecting because his son William has been assigned a book about race relations in Chicago by his theology teacher. The book (quite accurately) portrayed relations as poor, and Mayor Daley insisted they were good. There was some name calling at a parent-teacher conference. Now Royko only says that the younger Daley went to a Jesuit high school and gives us no further details.

There are two Jesuit high schools in the Chicago area, but no need to look it up: Bill Daley went to St. Ignatius on the near south side. I know because I went there myself about fifteen years later. I was mildly curious who his theology teacher was, because it was possible it was somebody I knew, but Royko doesn't say. Why not? Everybody in Chicago at the time knew of the connection between the Daleys and St. Ignatius, and anybody who could have done harm would have known the priest who taught theology at the time, so Royko wasn't protecting anybody that I can see. He was just being vague.

And that's the problem with the book, what limits its usefulness now. Read it if you like the dry (but maybe heavy-handed) irony of Royko, but don't read it expecting it to be a good primary source about Mayor Daley. And even if you like Royko (as I do) I'd read a collections of his columns first, several of which are still in print, or Slats Grobnik and Friends, which isn't.

It used to be easy to find a copy of this in used bookstores in Chicago, because it sold so well. It probably still is. I've been carrying this around since I lived in Chicago, so it's done some traveling of its own. But it is now off my TBR list. My Reader's Block Mount TBR Challenge.