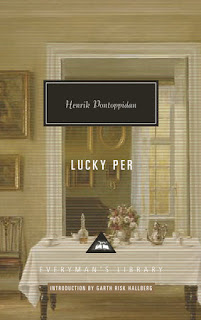 Peter Andreas Sidenius (Per) is a middle child in a large family. His father is a severe and pious minister; his mother, an invalid. They live in a small town in the south of Jutland, which was then, as now, considered the sticks of Denmark.

Prayers and hymns are the order of the day for the family, but not for Per, who rebels against all that. We feel Per is an irritable and objectionable young man, but his sins, while in his home town, are pretty minor: with a gang of boys, he steals apples from a farmer's tree; he sneaks out of the house to go sledding after dinner. Nevertheless his father shames him publicly for these transgressions. Per is determined to get to Copenhagen as soon as he can; he's going to be an engineer, none of this piety for him.

But when he gets to Copenhagen and university, he can't be bothered with classes or even exams; instead he spends all his time drafting a proposal to create a canal network for Jutland. As far as we can judge such things the canal network seems clever, but Per hasn't the patience to master the preparatory training and offends the financial and political powers he will need to make things happen.

(Weirdly my professional career as a computer consultant involved three business areas; two of them were shipping and finance. I would say Pontoppidan, who trained as an engineer, understood shipping--canal dredging in this case--in a deep way; his knowledge of financial markets and stock issuances feels pretty shallow.)

Per is a pretty objectionable hero, and the narrative voice doesn't let us forget that. There's a lot Nietzschean-sounding language: is Per an Übermensch who will remake the world if only all those little people get out of his way? Sometimes he thinks so. Still we care about him. He definitely does some bad things, but some of the worst are only fantasized: he thinks about dumping his rich fiancée to chase after an even richer girl, but doesn't. Like many a young man he can't bring himself to say, "I love you." Too socially maladroit to say it, he writes her a rather charming love letter, but decides it's all sentiment and burns it rather than send it.

And whatever he does brings on the clucking condemnation of his father and his oldest brother.

That rich fiancée is Jakobe, the daughter of a Jewish merchant, and is a fascinating character in her own right. She has a younger, more conventionally pretty sister, Nanny, who attracts all the boys, including Per, until Per decides he's more interested in her more serious-minded older sister. I was reminded of Dorothea (though Nanny is flightier--and less likeable--than Celia) from Middlemarch, though the other Eliot comparison is clearly Daniel Deronda (a point made in the Introduction as well) and here Pontoppidan wins hands down. Pontoppidan's view of the Jewish community is equally sympathetic as Eliot's but far more nuanced and convincing.

Too much more of the plot would start to feel spoilerish, so I'll refrain, though I will say the novel surprised me all the way through. Even thirty pages from the end I couldn't see how Pontoppidan would end it, but end it he did and more than satisfactorily. (Though there may have been a little too much forgiveness at the end. I don't know. But maybe.)

One of the questions in the novel is which fairy tale best represents Per's trajectory. (You can decide if you think Nietzsche just another fairy tale.) It seems that an issue at the time was whether Scandinavian literature was all just fairy tales, or did it address real people with real problems. Pontoppidan suggests, why choose?

Is Per the stable boy who does a service for the king, marries the princess, and gains half the kingdom? Or--apparently a well-known Scandinavian fairy tale, though unknown to me--is he the troll that crawls out from under his rock, looks around, and then decides to crawl back under? Or a Cain doomed to wander? His father calls him that at one point. The German translation of the novel uses Hans im Glück for its title, one of Grimm's fairy tales, which would seem a bit to give it away, except after rereading the Grimm Brothers tale, I'm not so sure it's a perfect match either.

Lucky Per came out in in eight volumes from 1898 to 1904 (eight volumes making just under 600 pages in this edition) and is, I read, one of Henrik Pontoppidan's major novels. But it's only one of them. He won the Nobel Prize for Literature in 1917. Still the novel wasn't translated into English until 2010 and I don't know that even then it made much noise; Modern Library reissued it last year and that seems to have helped. I know a group of bloggers read it last year; James Wood reviewed it in The New Yorker; etc., etc. Those other novels haven't yet been translated into English. For something that seems to me quite clearly great this is pretty shocking. Germans were better served and took notice: my Modern Library edition features a rave blurb by Thomas Mann, and Georg Lukacs looked at the novel in depth in his The Story of the Novel.

So, yes, read it. It's touching, with love and ambition and philosophical questions (Nietzsche, but also very much Kierkegaard) on the go, it's troubling and thoughtful, and at least sometimes funny--forgot to mention funny earlier--and you care about the fate of the characters, Per and Jakobe, particularly.

But. I feel like I've been complaining about translations a lot recently, and I hate to grumble (no, of course, I like to grumble, I just don't want to be thought a grumbler) but the translation didn't strike me as very good. Garth Risk Hallberg, author of City on Fire, who wrote the introduction, says it's considered a stylistic masterpiece in Danish, and our Danish friend (also from rural Jutland in fact) told us the same. In English, it's not. Now I have no Danish, and I'm unlikely to learn Danish in this lifetime, so take what I say with a grain of salt, but there were a number of ungainly moments. Nanny eventually marries Dyhring, an editor and publisher:


"There was no question, on either side, of real passion. Dyhring's love expressed itself, after a while, mostly as a kind of impudent affection, and, despite the comparative meaninglessness of this inclination, Nanny showed herself willing to accept his provocative kisses. In fact, it was really the exigent satisfying of their mutual vanity that bound them together." [295]

This is funny, or meant to be, but 'showed herself willing'? And 'exigent'? Surely the register doesn't come across as so Latinate and pedantic in Danish. Or if it does, it's probably even more over the top, as satire.


"When it was revealed that the cakes on the table were Frøken Inger's own handiwork, the baroness and her sister vied with each other to eulogize them,..." [427]

Now it's true the cakes were about to die the death all cakes deserve--thrown headlong down the gullet--but is a eulogy quite what's implied in Danish? I ask you.

There were a few slangy Americanisms that pulled me up ("cut him some slack") but on the other hand The Beautiful Game was called football and not soccer.

Now maybe all of these translation choices can be defended on the basis of the Danish--I don't know and can't tell you--but then there was this:


"By this famous, snaking drive, they reached the Janiculum, with the wonderful view of all of Rome and mile-wide vista from the Campagna to the shining Albanian mountains in the distance." [302]

Wow, I thought! Was the pollution really so much less in Rome in 1885 that you could see the Albanian mountains? Surely not!

And, indeed, not. Even on Rome's clearest day you can't see the mountains of Albania from the Janiculum. The Apennines are in the way. What you can see is the Alban Hills. This is simply illiterate, both geographically and verbally. Sigh.

Oh, dear. Well, #NameTheTranslator...though maybe I shouldn't. But it's Naomi Lebowitz; she's an emerita professor from Washington University who wrote about European literature, and in particular, Scandinavian literature. She ought to be good. I'm afraid I don't feel she was.

Nevertheless, having slagged this translation (a slangy Britishism--probably out of date, too) I would note it took us a century to get to this first translation into English. The novel really is great. Don't wait for the next.