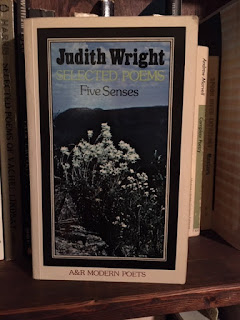 The Man Beneath The Tree

Nothing is so far as truth;
nothing is so plain to see.
Look where light has married earth
through the green leaves on the tree.

Nothing is so hard as love--
love for which the wisest weep;
yet the child who never looked
found it easily as his sleep.

Nothing is as strange as love--
love is like a foreign land.
Yet its natives find their way
natural as hand-in-hand.

Nothing is so bare as truth--
that lean geometry of thought;
but round its poles there congregate
all foliage, flowers and fruits of earth.

Oh, love and truth and I should meet,
sighed the man beneath the tree;
but where should our acquaintance be?
Between your hat and the soles of your feet,
sang the bird on the top of the tree.

I've been reading Judith Wright's Selected Poems: Five Senses a few poems a day for #AusReadingMonth, and quite enjoying it. And since The Other Reader has been berating me for not posting poems, I thought I'd better hop to...  😉

I thought about picking one of her poems more distinctly Australian, but I liked this one.

I've had this book on my shelf for a while now, and while I've dipped into it before, this will be the first time I've read it through. My fellow undergraduate/poetry mentor saw this on a shelf at a used bookstore and told me I ought to read Judith Wright, so I dutifully bought it. Now I'm puzzled why I waited so long.

This volume is a selection made by Judith Wright herself; mine is the second edition (with more poems!) from 1972. She died at the age of 85 in 2000.

Jennifer, the founder of Poem For A Thursday, has a lovely (and amusing! as he so often was) Clive James poem this week, doubly timely because of his recent death and #AusReadingMonth. Brona has another wonderful Australian discovery (for me) by Ali Cobby Eckerman.
Posted by reese at 10:01 PM 6 comments:

"Mine, I fear, is not a well-regulated mind: it has an occasional tenderness for old abuses; it lingers with a certain fondness over the days of nasal clerks and top-booted parsons and has a sigh for the departed shades of vulgar errors." 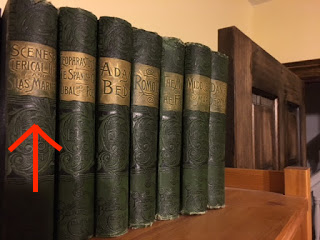 Scenes of Clerical Life represents Eliot's first published fiction; its three stories came out in Blackwood's Magazine in 1857; they were collected into the book the following year. She was already reasonably well-known under her real name as an essayist and translator from the German, but the first story was published anonymously before she coined the pseudonym for subsequent publications.

The stories take place in the past, twenty, thirty, sixty years ago. They are either the times of George Eliot's childhood or represent stories of the further past that might have been told in George Eliot's childhood. They're narrated in a first-person voice, but the narrator is not a character in any of the stories, and in at least one is explicitly recalling childhood. They all take place in the same fictional space (closely based on Nuneaton, Wikipedia tells me, where George Eliot grew up) and characters overlap between the stories.

"The Sad Fortunes of the Rev. Amos Barton" is the first of the three stories. Amos Barton is the Vicar of Shepparton, happily married with six beloved children. He's a reasonably good vicar, though no saint. To be sure he holds multiple livings, but has to pay curates to do the work for all except the one, and he doesn't make enough to live on. He loves his wife, but doesn't think much about her. The Bartons get involved in charity toward the fairly dubious Countess Czernacki, and their finances go from bad to worse. George Eliot's ironic tolerance is in fine form and it's the funniest of the stories until, well, it isn't.

The second story is "Mr. Gilfil's Love Story". Mr. Gilfil is just before Amos Barton's time, and the town thinks of him as old and sedate, just a little bit boring, and fortunately given to preaching short sermons. But, as it turns out, that's not the full story.

"Janet's Repentance" is the last and longest of the three stories. The Rev. Tryan comes to town, working among the poor weavers; he wants to start an evening lecture at the church. But the respectable elements of the town accuse Tryan of Methodism or worse; his case is not helped by the support of Mr. Jerome, the town's one well-to-do Dissenter. The lawyer Dempster organizes the opposition to Tryan, with the aid of his wife Janet.

The town admires Dempster as a clever and not overly scrupulous lawyer, but he drinks too much. Janet joins her husband in his campaign to smear Tryan, not so much out of conviction, but as a way to reignite the love between them that had soured since they first married.

I thought this one took a little long to get going and in the beginning there was too much simple picturing of the people of the town, so I'd say it's the weakest; but it does get going and makes a pretty good story as well.

So, are these Middlemarch? Well, no. But even second-rate George Eliot is still awfully good, and it's nice, in a way, to see that she didn't first appear full-grown in armor like Athena from the head of Zeus, but had to work to get better. And did. Gives some hope for the rest of us... 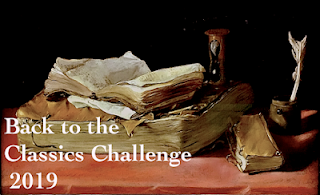 and one for the Karen's Back to the Classics Challenge.

It also means I've only got one volume left to read in that collected Eliot shown above, the volume with the poems, a play (!) and The Impressions of Theophrastus Such, Eliot's last work.

The collected George Eliot posts on the blog.