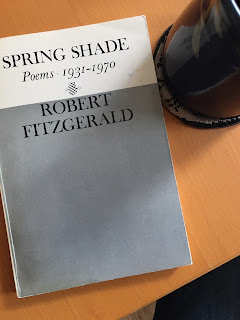 The organist has closed his instrument
After recessional, and closed his book;
Counterpoint that his fingers undertook
Into the world of light has made ascent.
Airy agilities for perfection spent
Have quieted at last, but not the look
From the musician's eyes that will not brook
A blundering word upon a great event.
Far from New England's leafiness I write
In that land of the old latinity
And golden air to which at length he came,
My master and friend, as to his own birthright.
What farther land he found I hope to see
When by my change our evenings are the same.

-Robert Fitzgerald
Robert Fitzgerald (1910-1985) is best known as a translator, largely from Latin and Greek. (Iliad, Odyssey, Aeneid, among others.) But he was a poet in his own right. Dudley Fitts, (1903-1968) was also a translator and poet. Fitzgerald had Dudley Fitts as an instructor at Choate as a teenager; they later went on to cooperate on several translations from Euripides and Sophocles.
Dudley Fitts was also an organist.
C.H.F. will be Dudley Fitts' wife--or, I suspect, widow, though I'm not entirely sure when this poem was written--Cornelia Hewitt Fitts.
New Directions didn't feel the need to do anything fancy with the cover to sell this book, did they?
Posted by reese at 6:20 PM 6 comments: 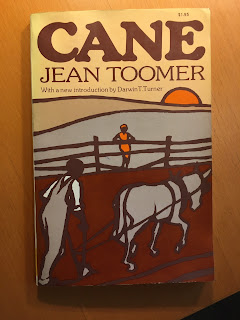 Within this black hive to-night
There swarm a million bees;
Bees passing in and out the moon,
Bees escaping the moon,
Bees returning through the moon,
Silver bees intently buzzing,
Silver honey dripping from the swarm of bees
Earth is a waxen cell of the world comb,
And I, a drone,
Lying on my back,
Lipping honey,
Getting drunk with silver honey,
Wish that I might fly out past the moon
And curl forever in some far-off farmyard flower. 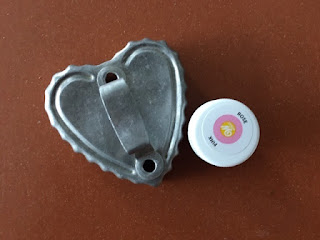 -Wendy Cope
'Tis the season! I don't quite yet know where the elements in that picture are leading me, but somewhere, I guess...
The form of the poem is a triolet. I had more to say about that here.
Happy (upcoming) Valentine's Day to all. (And one Other Reader in particular!)
Posted by reese at 10:58 PM 9 comments: 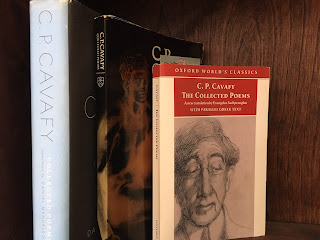 When suddenly, at the midnight hour
an invisible company is heard going past,
with exquisite music, with voices--
your fate that's giving in now, your deeds
that failed, your life's plans that proved to be
all illusions, do not needlessly lament.
As one long since prepared, as one courageous,
bid farewell to the Alexandria that's leaving.
Above all, don't be misled, don't say it was
a dream, that your ears deceived you;
don't deign to foster such vain hopes.
As one long since prepared, as one courageous,
as befits you who were deemed worthy of such a city,
move with steady steps toward the window
and listen with deepest feeling, yet not
with a coward's entreaties and complaints,
listen as an ultimate delight to the sounds,
to the exquisite instruments of the mystical company,
and bid farewell to the Alexandria you are losing.

One of the most famous of Cavafy's poems. I should have picked something less well-known, but in the end, I didn't. 😉 The final version of the poem is from 1911. Cavafy is, of course, a native of Alexandria.

It alludes to Plutarch's Life of Antony (ch. 75, here from the 'Dryden' translation). Dionysus, Antony's patron god, leaves him to his fate. Antony is bottled up by Octavian's forces in Alexandria:

'That night, it is related, about the middle of it, when the whole city was was in a deep silence and general sadness, expecting the event of the next day, on a sudden was heard the sound of all sorts of instruments, and voices singing in tune, and the cry of a crowd of people shouting and dancing, like a troop of bacchanals on its way. This tumultuous procession seemed to take its course right through the middle of the city to the gate nearest the enemy; here it became the loudest, and suddenly passed out. People who reflected considered this to signify that Bacchus, the god whom Antony had always made it his study to copy and imitate, had now forsaken him."

Antony commits suicide the next day rather than be taken by Octavian, shortly to be followed by Cleopatra.

I was spouting off about Cavafy translations recently, and have been wanting to look them up. I generally prefer the Sachperoglu versions (in Oxford World Classics) except I prefer the alternative title 'The God Abandons Antony', more commonly used. The first few lines from the Keeley and Sherrard version:

At midnight, when suddenly you hear
an invisible procession going by
with exquisite music, voices,
don't mourn your luck that's failing now,
work gone wrong, your plans
all proving deceptive--don't mourn them uselessly:
as one long prepared, and full of courage,
say goodbye to her, to Alexandria who is leaving.

And the opening of the Daniel Mendelsohn version:

When suddenly at midnight, there comes the sound
of an invisible procession passing by
with exquisite music playing, with voices raised--
your good fortune, which now gives way; all your efforts'
ill-starred outcome; the plans you made for life,
which turned out wrong: don't mourn them uselessly
Like one who's long prepared, like someone brave,
bid farewell to her, to Alexandria, who is leaving.

Your preference?
The Sachperoglu is bilingual; the Mendelsohn has more poems and more notes. Keeley & Sherrard is probably the best-known.
I started to type in the Greek, but doing that on my English keyboard began to feel like a chore...
I believe there is also a version by Rae Dalven, who was the first to translate a volume of Cavafy into English, in 1961, but I couldn't conveniently find it. But in looking for it on line, I discovered Leonard Cohen set a version to music on his album Ten New Songs of 2001. He sings it as a duet with Sharon Robinson. Alexandria gets changed to Alexandra, so it can pass as a breakup song if you like.
I thought it was pretty good.
Cavafy is important in the Durrell Alexandria Quartet series.
Posted by reese at 2:27 PM 12 comments: