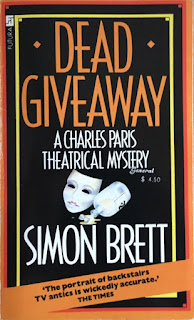 Dead Giveaway is the eleventh Charles Paris mystery. It appears in 1985. Paris, a not very successful actor, gets a small gig as one of four real-life professionals in a new British game show called If The Cap Fits. Four contestants try to guess the job of the four professionals with the assistance of four celebrities. The host of the new show Barrett Doran is murdered by cyanide on camera during the filming of the pilot.

Paris, who has completed his part of the filming, has already found the bar when the murder is committed; he's at home the next day when the police announce they've arrested a suspect; he's inclined to have nothing to do with it. That doesn't happen: one of the production assistants seeks his help because the accused murderer is a friend of hers:

"Charles felt childishly pleased as he put the phone down. He was amused by the idea that, while his acting career remained undistinguished, his reputation as an amateur detective was spreading."

The twelve figures above plus another half-dozen members of the crew (assistant stage manager, producers, set designer, etc.) and hangers-on mean that there's a good number of potential suspects in the case, and a surprising number of them (well, not that surprising) have reason to hate Doran.

I'm afraid this one felt pretty thin to me, like the series was beginning to bore its author a bit. He remains a professional about it, but... There were too many poorly delineated suspects, and even though that list gets winnowed down pretty ruthlessly early, the characters were all a bit of a blur. The regular jokey motifs Brett uses--Paris' lackluster agent, his drinking, even the bad reviews--were less strong. While I didn't anticipate the actual murderer, the plotting felt like it had just the usual twists.

Ah, well. You may be able to solve them all, but you can't win them all.

And it clears off the Simon Brett section of my TBR pile.
Posted by reese at 3:33 PM