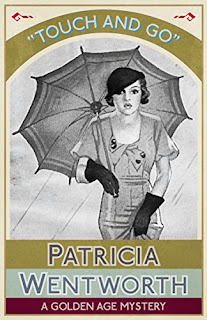 I'm a great fan of Patricia Wentworth's Miss Silver mysteries, but this is the first of her novels I've read out of that series. Touch And Go came out originally in 1934, and has recently been reissued, together with all her other non-Miss Silver mystery novels, by Dean Street Press. The introduction is by Curtis Evans of The Passing Tramp.

As the novel begins, Sarah Trent is being interviewed for the position of companion to Lucilla Hildred. Lucilla is 17; her mother and step-father have just died in auto accident, and she's been left to two aging guardians, her great aunt Marina Hildred and her (I think) great uncle Geoffrey Hildred. It's Marina Hildred who is conducting the interview.

Marina Hildred is a bit of a ditherer, and she's constantly nattering on about family relationships. Those relationships are intricate and important, and that's one way you know you're in a Patricia Wentworth novel. The other is that Wentworth writes wonderfully, both amusingly and believably, about maiden aunts, and Marina Hildred is no exception. By the end of the interview, Sarah Trent is pretty sure she's got the job pending a second interview with Geoffrey Hildred, we've got a basic grounding in the family history, and I, at least, was hooked.

One, possibly more, of Marina Hildred's nephews died in World War I. Those nephews include Lucilla's father.

As Sarah Trent is driving away from the Hildred estate, she nearly runs over Lucilla, the first (that we see) of several dangerous, near-fatal accidents that occur to Lucilla. There were and will be others.

But this is more a sensation novel than a murder mystery. Think Wilkie Collins' The Woman In White, with Lucilla in the Laura Fairlie role. In the end, none of the deaths we learn about were actually murders, but like The Woman In White there's plenty of suspense in the attempt to take advantage of a young woman who will be an heiress. But in the end our Count Fosco is revealed; a couple of marriages are impending; and John Brown turns out to be a name made up (are you surprised?) by a previously missing Hildred.

I found this to be equally as good as the best of the Miss Silver mysteries. I'd recommend it highly.

I suppose that's supposed to be Sarah Trent on the cover. "A decided brunette," according to Marina Hildred. But I'll count this for the category Glove.