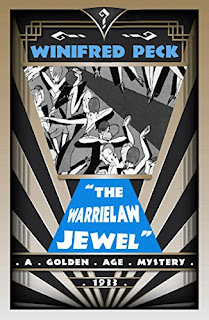 The Warrielaw Jewel is a family heirloom for the Warrielaws. As legend has it, a Warrielaw in the distant past married a fairy princess, and the dowry that princess brought was the jewel. And ever since, it's been a curse and a source of contention.

Or maybe the Warrielaw family just likes to quarrel. There are two unmarried sisters of the oldest generation, and three cousins of the next, and none of them get along with any of the others. What to do with the jewel, whether to sell it or keep it, is one of the main points of contention, with the oldest, Jessica Warrielaw, for selling and the rest for keeping.

The novel is narrated by a young Englishwoman who has just married a Scottish lawyer and moved to his hometown of Edinburgh. He's the lawyer for the family, which motivates their involvement, but in addition to being the narrator, she's a key witness to the events on the day of the murder of Jessica Warrielaw.

This novel (1933) is the earlier of Winifred Peck's two detective novels, but she was a prolific novelist in a literary family. One of her brothers was the editor of Punch; another was Msgr. Ronald Knox, he of the ten commandments of detective fiction writing. You'll be pleased to know none of those commandments were violated in The Warrielaw Jewel. Her niece was the wonderful novelist Penelope Fitzgerald, who wrote a collective biography of her father and her uncles, The Knox Brothers, in which her aunt Winifred features much less than she deserves.

But while this novel was perfectly enjoyable, it was not, I would say, one of the greats. It definitely intends to be play by the rules of Golden Age detective fiction, and it even includes a challenge to the reader. As is usual with me, I knew perfectly well who the murderer was by then, but not for the right reasons: rather I knew because of the tone with which the author wrote about the suspects. Explaining the mechanism dragged on a bit.

There isn't a scene of ballroom dancers anywhere in the novel, so I'm not really sure what the cover has to do with the novel. Oh, well. There is certainly jewelry on the dancers, and this is The Warrielaw Jewel, so that's what I'll count it for my challenge list.