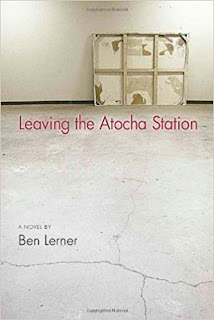 Leaving The Atocha Station is the debut novel of Ben Lerner, author at that point of three volumes of poetry. It came out in 2011, though the events take place in 2003, 2004.

The Atocha station is the main train station in Madrid, Spain. "Leaving The Atocha Station" is a poem in John Ashbery's book The Tennis Court Oath.

The novel is told by Adam Gordon who's living in Spain on a fellowship; the goal of his fellowship is to study the Spanish Civil War and produce an epic poem about the subject. Instead he seems to smoke a lot of hash and take some sort of unspecified pills. He tells us his Spanish isn't very good and maybe it's not; in the beginning he seems uncomfortable talking to actual Spaniards, though he remains interested in the girls; gradually that changes. He gets involved in the poetry scene. Towards the end of the novel the Madrid train bombings and the subsequent protests occur. Gordon's friends are involved, though he's not otherwise directly affected.

The novel is funny; it has that sort of confessional humor where you reveal embarrassing things about yourself. Adam tells us of his lies and his lusts, his drug use, his doubts. Think There's Something About Mary.

This confessional humor is compounded by the clear connection between Adam Gordon and Ben Lerner: both are young poets, both won fellowships to study in Spain, both have a pair of psychologist parents living in Kansas. You squirm and say, did he really do that?! Or is this just a novel?

This seems to be a thing these days, this flirtation with the confessional. Is it memoir? Is it a novel? An obvious comparison is Sheila Heti's How Should A Person Be? On a more monumental scale, there's the Knausgaard series, which I haven't read any of. The modern root of the phenomenon at least in English is maybe Chris Kraus' I Love Dick. David Shields' Reality Hunger tries to provide an intellectual defense. It does add a feeling of trueness that the character is so close to the author; the confessional adds to that sense this must be real. I think I Love Dick is the best of the ones I've read. But I also have a real suspicion of this trend.

At its worst it becomes just solipsistic, and that seems to me just a way of abandoning what the novel is best at, what it's most unique strength is: the ability to present the interior world of multiple people in conjunction.

I felt the solipsism strongly in the first half of Lerner's novel. It was probably intended; the book is funny about the limitations of an imperfectly understood language. Then later the injection of important political events alleviates it and reminds us that the Adam Gordon character is a bit jejune, that he is (possibly) coming out of a shell by the end of the novel. But it's a risk and one I don't think the novel entirely overcomes.
Posted by reese at 8:59 PM