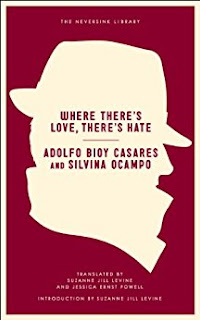 This mystery novella is narrated by Professor Huberman, an amusingly pompous doctor. "I belong, I must admit, to the brotherhood of Hippocrates." The doctor has literary pretensions as well, and is, at the beginning, retreating to the seaside in order to work on a screenplay of Petronius' Satyricon, which he has been commissioned to write.

Adolfo Bioy Casares and Silvina Ocampo were husband and wife, both writers; this novella of 1946 is their only collaborative effort. They were part of an Argentine literary circle that also included Jorge Luis Borges. They were all, it seems, fond of detective fiction; Bioy Casares and Borges collaborated as well on a series of detective stories called Six Problems For Don Isidro Parodi, which I've previously read, but must admit to not really remembering.

Professor Huberman heads off to a seaside resort named Bosque del Mar in order to achieve the quiet he needs to work on his Petronius screenplay. The resort is ridiculously difficult to arrive at: it's miles and miles down a single-lane plank road; drive off the road (and Huberman is arriving in the dark) and the car will be buried in sand. And a storm is arriving to complete the isolation. It's a perfect setup for a country house murder.

Not that Huberman knows anything about that. (Wink, wink.) He carries his Petronius with him and uses it to disparage detective novels:


When will we at last renounce the detective novel, the fantasy novel and the entire prolific, varied, and ambitious literary genre that is fed by unreality? When will we return to the path of salubrious picaresque and pleasant local color?

Of course, while the Satyricon might possibly be said to be known for its picaresque-ness, there's certainly nothing salubrious about it, salacious rather; and I would not say the Satyricon involves pleasant local color, unless your idea of pleasant local color involves drunken and debauched ancient Romans. But since Huberman has also just alluded to the Moonstone, perhaps we can't take him entirely seriously.

As is suitable for a country house murder, everyone who is trapped at the end of this road is at one point or another a suspect, though most of the suspicion falls on the sister of the victim and her intended. There are several red herrings and the resolution is good, though not spectacular.

All in all I would say it was fairly amusing, but for me the book doesn't quite have a successful tone: Bioy Casares and Ocampo can't quite resolve how sincerely they're adhering to the conventions of the genre. It's OK to have a certain knowingness about the field: it's not possible to write as if Arthur Conan Doyle and Agatha Christie hadn't existed. But this neither takes the genre entirely seriously nor does it have the broad comedy of something like Murder By Death.

I can't really say what the cover has to do with the book, but since the figure there has his hat pulled low and his collar turned up, I'm going to call him shadowy.

This book has also been on my shelves for two years, so it is one more in the My Reader's Block Mount TBR Challenge.
Posted by reese at 5:27 PM