John Dickson Carr's The Case Of The Constant Suicides 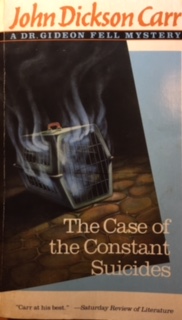 Bradley at ahsweetmysteryblog has a post about Patricia Wentworth's Miss Silver mysteries in which he observed that one's sense of an author can be thrown entirely off by starting with the wrong book. There are very few authors (Sarah Caudwell comes to mind) whose works are all equally good and (as in the case of Sarah Caudwell) if that's true, it's usually because there just aren't very many.

I think I've been a victim of this with regard to John Dickson Carr.

There are a lot of John Dickson Carr/Carter Dickson novels out there and before this I'd read only three. I'm not surprised they're not all equally good. But based on the three I'd read, I'd decided that despite all the good things I'd heard, John Dickson Carr wasn't really for me. But there were a few more on my shelf--this one's been here since 2000, I'm sorry to report--and since it would do double duty for both the Vintage Mystery Cover Scavenger Hunt and the Mount TBR Challenge, I thought, well, I could try another.

As I said: wow. I've clearly been denying myself a considerable pleasure.

I wasn't very far into this volume and I knew mistakes had been made. I typed 'best john dickson carr' into my Google search bar and this post appeared at the top of the list. It turned out two of the three I'd read were down at the bottom among those the post's author said would appear in nobody's best Carr list, and the other certainly wasn't in the top five. And this one was in that top five.

Where was the wisdom of the Internet when I was last reading Carr? Still in the future, I'm afraid.

This one starts out with two Doctors Campbell summoned to Scotland for a Campbell family conference; they're both assigned the same sleeper on the overnight from Euston station to Glasgow. One is a male Doctor Campbell (Alan) and the other is a female Doctor Campbell (Kitty-Kat, among other names) who have never met, and know nothing about each other, but have been conducting a feud in the letters section about the Duchess of Cleveland. They would be played by Spencer Tracy and Katherine Hepburn in the movie version and we know how that will turn out. That's fine. I completely approve of RomCom subplots in my mysteries:

"Do you mean," he bellowed delightedly, "there's going to be a wedding?"

"Yes to both questions," replied Alan.

There is also the Doom of the Campbells, and despite the one dead Campbell, the Doom is actually a whiskey:

"You must remember," said Alan, not without reason on his side, "that I spent three years in the United States during Prohibition days. Anybody who can survive that experience has nothing to fear from any liquor that ever came out of a still--or didn't."

"You think so, eh?" mused Colin. "Do you now? Well, well, well! Elspat, this calls for heroic measures. Bring out the Doom of the Campbells."

With all this the mystery might even be secondary, and who would mind? But it isn't. The plot is strong, the room is locked, and Dr. Gideon Fell is summoned to investigate. There are only two clues: a disappeared and eventually reappeared diary, and a dog carrier or suitcase that somehow appears inside the locked room. Eventually a second body is found with an accompanying suicide note that indicates the suicidee is the perpetrator of the first crime. The fact that the suicide note is typed tells us all we need to know about that.

The solution is very satisfactory, though I admit to doubts about the science of it. But that doesn't matter. Superb. A real discovery for me.

And it does double duty. While I'd definitely call that a dog carrier on the cover, it's also called a suitcase in the novel, and the fact that it is, is important to the plot, so:

And it's been aging on the shelf for years, like the fine wine (or whiskey) it is: Mount TBR Challenge.