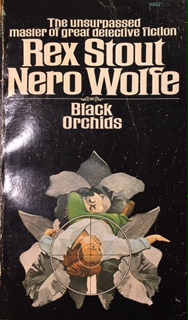 Black Orchids contains two novellas; the first, "Black Orchids," came out in 1941; the second, "Cordially Invited to Death," in 1942. The volume with both was originally issued in May of 1942.

Though the war was on in Europe, and while Rex Stout had previously engaged with it in his Nero Wolfe mysteries, in these two, there's no sign of trouble abroad. Instead, the world might well be at peace: the first centers around a flower show, and the second starts when a famous and successful arranger of parties shows up to hire Wolfe.

The flower show features as one of its wonders black orchids (featured on the cover of my edition) and, of course, Wolfe has to have them. He starts by sending Archie to the flower show to investigate. Are the real? Are they really black? And have they been pollinated so that there might be more? Archie goes three days in a row, but is more interested in the girl on display than the flowers, though that interest doesn't stop from making an accurate and nuanced report on the black orchids.

Of course, in the end, Wolfe (who never leaves his house) leaves his house to see the black orchids. They're both at the flower show when the murder occurs; a gardener is murdered in the middle of the most popular exhibit in the entire show, popular precisely because of that girl that Archie had been admiring. Wolfe wants nothing but to go back home, but it's Archie who recognizes that the body is a dead body, and has a couple of other tricks to play. It's the opportunity Wolfe was looking for. A job, and the fee will just somehow happen to be those black orchids. Which in the end he earns. But it's Inspector Cramer, the homicide detective, who has the last word:

"'They're pretty,' Cramer said politely, turning to go. 'Kind of drab, though. Not much color. I like geraniums better.'"


In the second novella, Bess Huddleston, the party arranger, attempts to hire Wolfe because she's receiving threatening letters. He turns down the job. Later she's murdered, and Wolfe claims not to care, but after Inspector Cramer badgers him, he decides to do something. But not leave the house: "A man crossing a street is extremely likely to get run over. That's why I never undertake it." Except when there are flowers or meals involved...

I found this one a little less successful. One of the charms of the Nero Wolfe series is the final scene where he assembles everyone and winkles the solution from the assembled suspects. Here he simply demands that people tell him things and they don't, so he tells them what they were supposed to tell him. Perhaps the novella length meant that Stout had to make it happen a little faster. There's often a romance on the side in these mysteries; the one in "Black Orchids" was more amusing than the one in "Cordially Invited To Death." Still both were quite enjoyable; it was definitely a strong Wolfe outing.

And it comes with flowers, those three black orchids right there on the cover. Pity I didn't read it a week ago, since flowers was one of the winning categories. But since the random number generator favored me for the Mount TBR challenge, I have nothing to complain about...