Graham Greene's A Gun For Sale 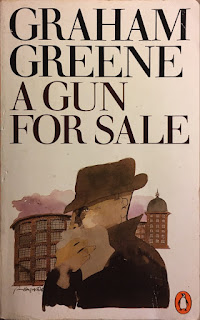 Graham Greene's A Gun For Sale first came out in England in 1936. It was called This Gun For Hire when it came out that same year in the U.S., and that was the title used for the Alan Ladd/Victoria Lake noir film of 1942.

All the more to establish Raven as a villain and a monster. The first lines of the book are: "Murder didn't mean much to Raven. It was just a job." After he shoots the minister, he exceeds his brief and shoots the secretary, an older woman who pleads for her life in a language he doesn't understand.

Naturally things have to be complicated a bit. Raven returns to England where he's paid off by a fat man who loves sweets. But the notes are marked; and Raven, who has little money otherwise, after spending the first realizes he can spend no more of them. From the moment he spends the first one, he's a hunted man. He's naturally pissed about this, and vows revenge on the fat man, and, as he comes to learn, the power behind the fat man, a rich financier.

Raven spends the rest of the novel avoiding the police, and determining and then tracking down his employer. He also comes to understand the point behind the seemingly pointless crime he committed. There's a girl. She begins to see Raven as a more rounded figure just as we do.

The plot is well-done, tautly paced, and makes good use of the international situation in 1936. The movie, which comes out after the war is started, not long after Pearl Harbor, feels forced to update the plot, but it's not improved: the subtlety is lost in comparison to the novel.

Greene calls this one one of his 'entertainments,' implying he thought it one of his lesser efforts, but mostly it doesn't show it, and Greene later decided he was unhappy with the division of his fictional works into entertainments and novels. Raven can easily run with such existentialist killers as Meursault of Camus's The Stranger or Pinkie of Greene's own Brighton Rock.

However, that it's ostensibly a lesser work is not an adequate excuse for the fact that Greene makes that evil rich financier a Jew. Even in 1936. My politics are such that I don't mind rich financiers as evil villains, but not like this. Maybe Albanian Catholic is the answer.

The cover actually suggests the cover artist read the book: that must be Raven on the front, with a handkerchief to cover his harelip, and the building in the back looks like a commercial property, perhaps Midland Steel, where the finale takes place.