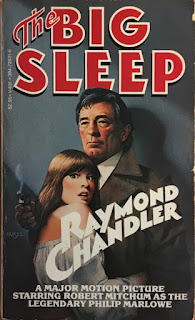 I could tell you the plot, but you probably already know it, and it doesn't matter much anyway: it's all on the surface. This is famously the Chandler novel where the scriptwriters for the Bogart-Bacall movie version asked who killed the chauffeur, and Chandler said he didn't know.

But if it's all on the surface, what a surface it is, like, say, Vivian Sternwood Regan's legs: "The knees were dimpled, not bony and sharp. The calves were beautiful, the ankles long and slim and with enough melodic line for a tone poem." Not a word about whether those legs have any muscle in them or even if they move.

After reading Ross MacDonald's The Doomsters, I thought I'd read The Big Sleep to compare. Their setups are similar: each has a rich father, dying in Chandler, already dead in Ross MacDonald; two troubled children, the younger one more troubled; ash blondes abound in both. And, of course, MacDonald read Chandler. His blurb is practically mandatory on paperback editions of Chandler:


Chandler wrote like a slumming angel and invested the sun-blinded streets of Los Angeles with a romantic presence.

Though meant as a puff, the quote also suggests what I sometimes dislike about Chandler: his tendency to romanticize. I don't always believe in the presence of Marlowe on the page, though when he's embodied by Humphrey Bogart, I do. (I've never seen the Robert Mitchum version of my paperback tie-in edition.) But Chandler (in Marlowe's voice) can playfully toy with that romanic image. Marlowe is in his apartment; Carmen, the younger doped-up and more troubled sister is there with the intent to seduce him. Marlowe has set up a chess problem on a board:


I looked down at the chessboard. The move with the knight was wrong. I put it back where I had moved it from. Knights had no meaning in this game. It wasn't a game for knights.

I was half-expecting to use The Doomsters to beat up on The Big Sleep, and it's true: Ross MacDonald has written a novel of more emotional depth. But as I said if The Big Sleep is all surface, what a surface it is.

I guess that's supposed to be Sarah Miles on the cover. Maybe it's the moment when Marlowe saves Vivian from a thief outside Eddie Mars' gambling den. But Marlowe didn't have a gun then in the book and certainly it shouldn't be smoking. So maybe it's something else or it's got nothing to do with anything. (Just don't ask Chandler.) But whatever is going on, I'd say she looks like a Damsel in Distress.