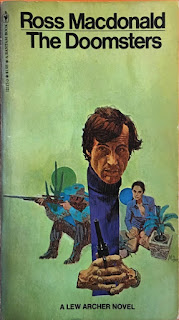 "That's when I consider my more serious work started. With The Doomsters." From an interview with Ross MacDonald in It's All One Case, p. 234.

I recently read It's All One Case, the collection of interviews conducted by Paul Nelson with Ross MacDonald. It only came out last year, though the interviews were conducted in 1976. The book is filled with pictures, of Ross MacDonald and his wife mystery writer Margaret Millar, and of what seems like must be every cover ever issued of any Ross MacDonald language in any of half-dozen languages. A wonderful book if you're a Ross MacDonald fan. It's been suggesting things for my reading list for a month or more now.

The Doomsters is the first of the MacDonald books I've reread since; I hadn't read The Doomsters in a while. It really is the beginning of the great period for MacDonald, the series of novels of the late 50s and 60s that generally center around broken families and troubled children. The Galton Case. The Zebra-Striped Hearse (my personal favorite). The Wycherly Woman.

Who knows what changes a good writer into a great one? (If I knew the formula, I'd use it myself, and then make it available to others on generous terms...) Unfortunately, one of the possible causes for MacDonald was, at the time he was writing this, stress. There was trouble with his own daughter. Linda Millar, aged 16 in 1956, had struck and killed a young boy with her car, then drove off, and an hour later, crashed in the rear of a second car. She was drunk at the time. She was confined to a state mental hospital for a period. Her trial was moved to adult court, where she was convicted, but given a sentence of probation. There were a couple of suicide attempts. All three members of the family underwent psychoanalysis. It was a notable event in what was a life of trouble for Linda. Linda Millar died, of what was probably a drug overdose, at age 31. [Details from Ton Nolan's biography of Ross MacDonald.]

Some of these events are transformed, but still recognizable in The Doomsters. It starts with Archer having a troubling dream, from which he wakes to someone knocking at his door. Carl Hallman has come to ask for help, with a recommendation to Archer from a person he won't name. Hallman has just escaped from the state mental hospital, and Archer agrees to help, but only if Hallman will agree to return to the hospital while Archer invetigates. But they don't get there: Hallman overpowers Archer, knocks him out, and takes his car. Archer carries on investigating on Carl Hallman's behalf anyway.

There's trouble in the past: Hallman's mother died, a presumed suicide after two earlier attempts. Hallman's father died more recently, in what seemed a bathtub accident. There's trouble in the present: Hallman's older brother is shot, with his mother's gun, then his sister-in-law. The family is wealthy and who gets the money is a concern. There are also doctors, well-intentioned and not; psychiatrists; mental health case workers; private nurses. As the deaths pile up and/or get reconsidered, Carl Hallman is the prime suspect, but Archer more out of intuition than for any thought-out reason thinks that presumption is wrong. That doesn't stop the corrupt local sheriff from rounding up a vigilante mob.

There's a successful final twist or two, and the plotting is good, but it's not the plotting that makes this one great; it's the troubled complexities of the family that make this one feel so much more substantial. Very highly recommended.

And it counts for the golden age mystery challenge. I'm going to go with hand holding weapon in the hands of what I assume is a groovy Seventies version of Archer on my cover.