Erle Stanley Gardner's The Case Of The Lonely Heiress 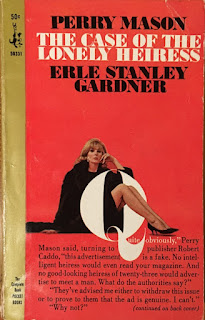 The copyright in my reprint of Erle Stanley Gardner's The Case Of The Lonely Heiress says it first came out in February of 1948. Maybe it was Gardner's first novel of that year. I doubt it was his last.

The setup is pretty good in this one. Robert Caddo is the publisher of a somewhat sleazy lonely hearts magazine. Women post ads in his magazine. The back of the magazine has a mailing coupon to contact these lonely women c/o Robert Caddo's magazine office, which he then forwards on to an anonymous box for the woman posting a particular ad. That's all fine and mildly lucrative. Then a woman posts an ad saying she's a young, good-looking heiress (not someone middle-aged whose parent has just died) and it's a hit. Caddo's magazine is flying off the shelves. But it's a little too much of a hit for the local vice squad who thinks Caddo has just gotten that much closer to pimping.

Caddo goes to Mason to prove that this advertisement is legit since he's created a structure whereby he doesn't actually know the women involved. Perry, with Paul Drake's help, identifies the lonely heiress of the title advertising in Caddo's magazine. She really is looking for a man, though for what purpose isn't quite clear at the start.

Caddo is a bit of a sleaze bucket. This is before internet dating, though the process is kind of analogous, and it was inevitable I suppose that he had to be. Della says:


You can take a look at Bob Caddo and see what he is. One of those old wolves that run around pawing girls and trying to cut corners.

After the setup, though, it deteriorates a bit. As you knew (unless you've never read a Perry Mason novel and you've never seen the television show) the lonely heiress, blonde and fur-coated on the cover of my copy, will go to Perry, engage him as her lawyer, and then promptly be suspected of murder. That's the convention, and conventions are useful. The real question is, who is the person who really did it, and how will Perry make a fool of Hamilton Burger?

Well. Hamilton Burger doesn't even show up in this one. The D.A. is James Hanover and he's not particularly confounded or interesting. The revelation of the actual murderer isn't especially surprising. And, while this is a short novel, it even feels a little padded. Remember how your fifth grade teacher taught you in writing an essay to first say what you were going to say, then say it, then remind your reader what it was you said? Yeah, me too. That may be good advice for making your essay clear and comprehensible, and it may also be good advice for padding out your word count. It's less good advice if you're writing a novel, but it's advice Gardner had in his head, I'm afraid. He may have needed the word count. Perry and Della decide what they're going to do when they break into a witness's apartment, then they do almost exactly that, and then the information shows up in the courtroom. Okay, we get it.

On the subject of rom com subplots, though, this one was a winner. I don't think of this as a usual item in my Perry Mason universe: there's merely the eternal question of when will Perry realize that Della is unspokenly pining for him. Here he takes her out for Chinese and dancing as a variant instead of a steak. But this one has another, more realized flirtation. The lonely heiress ends up with one of Paul Drake's detectives. Romance!

Summation: not the best, but if you like Perry Mason and are looking for a bit of fluff, you'll like this.