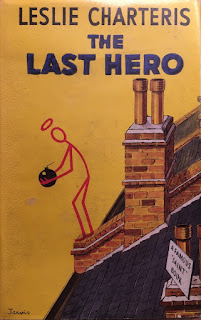 It is definitely a novel of the period between the wars, and is concerned with the horrors of the last war, and preventing a new one. There's a middleman who hopes to make money on armaments when the shooting starts--a similar theme to Graham Greene's A Gun For Sale of 1936. There's also a bomb-throwing anarchist which the Saint stops in the very first scene.

Professor Vargan invents an electronic doomsday weapon which the Saint discovers by accident. Vargan, who is British, but disaffected, is willing to sell his weapon to anybody, but offers it first to the Brits, who are happy to take it. But the Crown Prince of an unspecified country is also after it. And Dr. Rayt Marius, tall and ugly, is just hoping to start a war as a way to make money. The Saint has to punch and shoot his way through to keep the secret out of everybody's hands, and to keep the next war from starting.

There were more bodies and more deliberate violence on the part of the Saint and his allies in this one. Though the Saint proclaims he's a warrior of sorts, quite frequently when the bad guys die it's through some excess of their own devising. This time less so.

On the whole I found this one less good than some. It was a little long, and felt bloated. At one point, the Saint and one of his allies make a mistake that allows Rayt Marius to escape so he can be present for the finale. It's always a bit disappointing in one's thrillers when somebody has to do something stupid to set up the tension, and Charteris doesn't improve the situation by writing in the Saint's defence that he was especially angry. On the other hand the Saint estimates that Chief Inspector Teal, his nemesis and occasional ally with Scotland Yard, who is tracking him in this one, is a day and a half behind him. Teal does better than that, showing twenty-four hours earlier than the Saint expected him to, and saving the Saint's bacon in the process. That's a much better way to have one's hero be less than perfect.

Anyway, good, but not great.

That's the caricature of the Saint on the cover, about to drop a bomb on the street below. But it was actually the anarchist who was about to throw the bomb and the Saint stopped him. Oh, well, reading the book never seems to be required of cover designers. In any case it is: