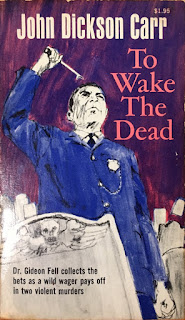 To Wake The Dead is a Dr. Gideon Fell mystery by John Dickson Carr from 1938. It has an odd, and frankly pretty unnecessary, setup in which Christopher Kent discovers the body of his cousin-in-law Jenny Kent in the top floor of a luxury hotel. He's been incommunicado for six weeks so he doesn't know that his cousin Rodney, Jenny's husband, has also been murdered in the same brutal fashion: strangled and then beaten around the face.

While I wouldn't exactly call this a cozy, it is Golden Age, and the brutality isn't dwelt on. Thankfully.

The top floor where Jenny Kent was murdered is entirely taken up by a party associated with South African millionaire Dan Reaper. For various reasons no one else has access to the top floor, or so it seems, establishing a country house murder scenario, without the country house.

As a fair-play cluing mystery, this was a superb entry. Everything was there to point to the murderer, but for me at least the killer came as a complete surprise. Perhaps the killer's seeming alibi for Jenny Kent's murder was a little improbable, but there were enough hints that it didn't seem unfair. And as I say I had no idea who it would be. Quite often in a Golden Age mystery I know who will turn out the killer less by the clues than by how the author writes about the killer.

I also thought about structure in this in a way I'm not really sure I should. But it brings up an interesting point.

In the beginning, there was Watson. (Well, not really, but go with me.) Our entry point into the story was not the genius detective, but the sidekick who was writing the story. Sidekicks can be first-person narrators or third-person focus characters. They can be useful and relatively competent (Watson of the books or Archie Goodwin) or amiable duffers (Nigel Bruce as Watson). Agatha Christie starts with Hastings as Poirot's regular sidekick before gradually letting him slip away.

The detective can be the focal point. This is certainly the case with the hard boiled style: the Continental Op, Sam Spade, Philip Marlowe. But many of the Ellery Queen mysteries work this way, too, as do the Perry Mason novels. As a general rule, the focal point character is present in every scene. Scenes where that character wasn't present can only appear by report.

We can also have no single character through whose eyes we see events, but shift as needed. This is less used in mysteries, though standard in literary fiction, especially of an earlier era. Partly this is because then what do you do with the murderer's thoughts? In any case Msgr. Knox forbade that in his list of rules, though yes, it does happen.

And you can have a one-time sidekick. That's what Carr does in this one, and while I haven't by any means read all of Carr's novels, it seems a common approach for him and others. There are one-time sidekicks in Edmund Crispin's Gervase Fen mysteries as well, for example. In this mystery it's Christopher Kent who is present in every scene. But Christopher Kent is or should be a suspect! He's given an alibi very early to make it seem somewhat acceptable he's invited into the room when Dr. Fell or Inspector Hadley interview suspects. I've swallowed this device in other mysteries, but this time it stuck out as unduly improbable. I understand why you might not want a regularly occurring dunce, but if your detective is professional or semi-professional, (Dr. Gideon Fell, though he doesn't seem to be paid, is regularly consulted) it just seems improbable that an amateur implicated in the case gets to be in the room all the time.