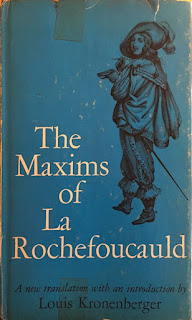 Maxims, epigrams, aphorisms, call them what you like: little polished bits of prose that stand by themselves. I've been thinking about them lately.

So what do I think? 1.) That in a collection they can reveal character, 2.) that aphoristic writers tend to repeat themselves over a collection; you might not have said what you had to say perfectly the first time so try again, 3.) that the character type best revealed by aphorisms have changed over the years, 4.) that Nietzsche represents a major point of inflection, 5.) that the attempt to present an argument in fragments, rather than written-through, feels very modern.

Last year I read a collection of aphorisms by the French/Romanian pessimist E. M. Cioran. When you feel that life is going to hell in a hand-basket, the inability to write anything longer than a paragraph feels like the right form: "If disgust for the world conferred sanctity in itself, I fail to see how I could avoid canonization."

I read somewhere that Sarah Manguso's 300 Arguments was an attempt to present a character by the use of aphorisms, so I read that. Though it was not quite what I was looking for, it was very good. "The word fragment is often misused to describe anything smaller than a breadbox, but an eight-hundred page book is no more complete than a ten-line poem. That's confusing size with integrity. An ant is not a fragment of an elephant, except orthographically."

The Portugese poet Fernando Pessoa's The Book of Disquiet was one of the best things I read last year. Pessoa may not have intended it to be a book of fragmentary aphorisms, but that's the way it is for us. "I'm astounded whenever I finish something. Astounded and distressed. My perfectionist instinct should inhibit me from finishing; it should inhibit me from even beginning."

In Christopher Miller's Sudden Noises From Inanimate Objects, a very amusing novel, the narrator plans to write a book of aphorisms. None of the aphorisms from his putative book show up, but he does write this: "Life is a gift, and like most gifts it isn't what you would have picked out for yourself, but you have to act pleased with it."

As for the Duc de la Rochefoucauld. His Maxims (1665) is not very modern, but he was writing during the reign of Louis XIV of France, the Sun-King. One wouldn't expect him to be. But he stands at or very near the head of the aphoristic writing tradition. It's easy to imagine him delivering his witty and cynical bon mots in the company of other men dressed like the dapper gentleman on the cover of my edition. Like, for example, maxim #93: "Old men love to give good advice to console themselves for not being able to set bad examples."