Michael Innes' Lament For A Maker 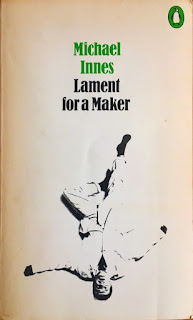 Lament For A Maker is the third of Innes' Appleby novels and came out in 1938. Appleby is at a fairly junior point in his career, a detective-inspector; he comes into this one late, and as he says, "It was in no sense--it never in any sense became--my case." His job is simply to round up the initial suspects. Of course he solves it. Or does he? One of the other characters says, "John Appleby, that clever London man, would have it the Guthrie case defeated him." In any case, by the end we know what happened.

J. I. M. Stewart, the man behind the pseudonym Michael Innes, was a professor of English and ended up an Oxford don. Especially in the earlier novels in the series, he tries different styles, borrowing at will from earlier literary works. Appleby's End, one of my favorites, is a pastiche of Stella Gibbons' Cold Comfort Farm, except I prefer it to the original. This one is Innes' take on a Wilkie Collins novel such as The Woman In White or, even more so, The Moonstone.

Both of those are great novels. The Moonstone is high on my pile for rereading at the moment, though it has been a month or two. And both are constructed as documents written by the various players in the book, each in their own style. And there's the rub.

The first document in this is a seventy page narrative written by Ewan Bell, a provincial Scottish shoemaker, and it's written in a nearly (to me, at least) impenetrable Scots dialect. Douce, gleg, stammagasted, dreich, meikle, (alright, I kind of knew that one) quean. I just wasn't prepared for a book where I'd need a dictionary at my side. After that we get narrations from a London swell, a pedantic lawyer, an Australian surgeon, and John Appleby himself. All those were easier but already I was off my stride.

As a consequence the absurdity of the plot struck me more negatively than it might. Evil near twin, amnesia, potential incest, ghosts, mad laird, creepy tower--it had it all and not necessarily in a good way. There were amusing bits, though, and while I saw my way through most of the solution, the final reversal remained a surprise.

So OK, but not my favorite Appleby. (I'd probably plump for Appleby's End.) If you do read it, I found this Scots dictionary to be practically a necessity.