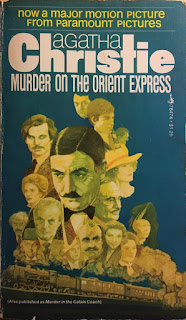 I pulled this one off the shelf because I wanted to see how Christie introduced a large number (twelve) of suspects, a victim, and a few other sundry characters. They're all in place, though a few somewhat sketchily, by page 20 in my edition. I could have stopped there. I didn't.

This is, of course, one of Christie's absolute best, and I say that as one of the large class that prefer Miss Marple to M. Hercule Poirot as her detective.

The novel starts with Poirot in Aleppo about to board the train to Istanbul. He's just completed a successful case in French Syria and he's talking with a junior officer delegated to see him to the train. The officer is unimportant. In case we haven't seen Poirot before, we come away with three traits, I'd say: he can be smug, but he's kind and thoughtful about what others think, and he's insightful.

He's told about and then sees the first two suspects: a colonel from India, and a young English lady from Baghdad. They're described by the conductor as exactly that, and for quite a while at least, that's exactly who they are. Colonel Arbuthnot and Mary Debenham. (Played by Sean Connery and Vanessa Redgrave in the 1971 movie of my tie-in edition.) They seem like they might be falling in love, and Poirot overhears a few snippets of their conversation; their conversation has a strangeness not entirely accounted for by the general awkwardness of falling in love. Page 7.

In Istanbul, Arbuthnot and Debenham intend to proceed immediately on to the Orient Express; Poirot has promised himself a holiday for a few days but when he reaches his hotel, there's a telegram requesting his immediate return to London. The concierge goes to book him a sleeper and Poirot sits down to a quick meal in the restaurant. There he meets M. Bouc, an old friend, now in charge of the Wagon-Lits company whose train Poirot will catch. This gives us another quick view of Poirot's interior:


"Ah!" sighed M. Bouc. "Les affaires--les affaires! But you, you are at the top of the tree nowadays, mon vieux!"
"Some little success I have had, perhaps." Hercule Poirot tried to look modest but failed signally.

This conversation was presumably conducted in French, since both participants are French Belgian. You'll have to decide what you think of the odd inversions and the French inserted into a French conversation. I admit to being of two minds about this sort of thing.

Our next two individuals of interest are also dining at the restaurant. These are two Americans, one rich and the other his secretary. We get the most extended description so far of the rich American: his (old) age, his (receding) hairline, his (false) teeth, his eyes. Of the young man, we learn his name is Hector and he "seemed agreeable." Of the elder, that he was Mr. Ratchett, and that when he went by, "evil had passed very close." This is page 12 in my edition.

It is Mr. Ratchett who will be killed.

The sleeper car is in fact full and it takes some fiddling between M. Bouc and an as yet unnamed conductor to find Poirot a cabin.  We see the conductor in action; he will be an important character because when he's not answering a call, his seat enables him to see the entire length of the car and see access to all the sleeper-room doors. Poirot ends up for the night in a second class cabin bunking with the nice young American who is at first irritated that he won't have the cabin to himself after all. We learn his full name is Hector MacQueen. Page 15-16.

It is at lunch in the dining car the next day that the remaining characters are swiftly introduced. M. Bouc and Poirot discuss their fellow diners. M. Bouc knows some of then; otherwise they just speculate on the basis of appearance and quick snippets of conversation. They are: "a big swarthy Italian," "a spare neat Englishman [with the] disapproving face of the well-trained servant," "a big American in a loud suit--possibly a commercial traveler," Princess Dragomiroff "one of the ugliest old ladies [Poirot] had ever seen," a woman "tall and middle-aged [with] a long mild amiable face rather like a sheep," "the third woman, [at the table with Mary Debenham] a stout, pleasant-faced, elderly person," then a woman "possibly German or Scandinavian," and a couple--"Hungarian Embassy, I believe"--according to M. Bouc. This is in addition to MacQueen, Ratchett, and Arbuthnot, also all in the dining car. And here we are at page 20. I condensed two pages into this paragraph, but the remaining suspects are done very swiftly, and about a couple of them we know next to nothing. They are a bit of a blur.

And we, the story, and the train are off! At least until the train hits a snowdrift and is stuck. The story, of course, carries on. [Odd coincidence. To look at this I interrupted my current reading of Dr. Zhivago. There Zhivago and family are stuck on a train in a snowdrift, until the whole train gets out and clears the way with shovels.]

This post is now probably overlong, and anyway, I've already thought about what I wanted to think about. I also, of course, don't want to give anything away. Agatha Christie is famously the queen of misdirection and this one's a doozy. But I will add I find this one more fun even on rereading than reading it the first time. The fact that I know the solution adds extra nuance, a little extra fun, to a number of things that occur early in the novel. It's not hard to guess which will be clues: Poirot frequently points them out. But knowing exactly how they will come to fruition is fun.

And this is the perfect novel for: