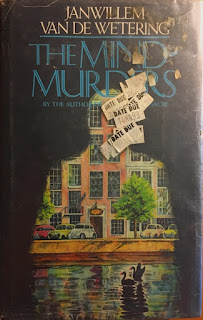 Somewhere, I no longer recall where, I saw this compared to Crispin's The Moving Toyshop. That was enough to make me get it at once.

Van de Wetering wrote a dozen plus mysteries about Amsterdam cops Grijpstra and de Gier. This was the eighth in the series and came out in 1981. It is the first of the series I've read.

This is really two novellas with some overlapping characters, both involving on the cafe with the red sign shown on the cover. The first centers on Frits Fortune who has just been tossed in the canal and has to be rescued by de Gier. Fortune's wife has disappeared together with all the possessions of the Fortune home. She's gone, but there's no body. Nevertheless Grijpstra is convinced it's murder, even with no evidence, and Grijpstra drags the mostly unwilling de Gier in pursuit of the case. In the end there was a crime committed, even if different from what Grijpstra was looking for, and it's solved.

In the second novella, there's definitely a dead body, dumped in the trunk of a car, suspicious enough, but the coroner's report indicates the victim died of a duodenal ulcer. This time it's de Gier who's certain there was a crime, and he, too, is right, though again it's different than what he expected.

So was it The Moving Toyshop? (One of my favorite mysteries.) Well, no. It has some of the amusing absurdity of Crispin's novel, but doesn't quite get there. A Porsche changes from right-hand drive to left-hand drive and back again, which might have suggested a disappearing toyshop. That Grijpstra can discuss Zen meditation or that the junior policewoman is uncontrollably lascivious and with a thing for older men shows some of Crispin's absurdity.

A quick look at Goodreads after the fact tells me maybe this isn't in fact the best outing in the series. But this was good enough I will try another.

It seems my library used to just print a sticker and slap on it the cover for the due date--that's the bunch of white rectangles in the picture above. Either the book fell out of favor or they quit that process some time ago because the last sticker shows a due date of 03Apr95.

The canal plays an important role in the two stories, and those canals are a major feature in Amsterdam. That counts for: