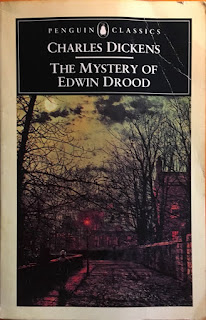 Can we talk about the mystery of The Mystery of Edwin Drood?

The Mystery of Edwin Drood was Charles Dickens' last novel and it was approximately half-finished when he died in 1870. Had he completed it, it probably wouldn't have been his best novel, but, hey, it's Dickens. It's still pretty good.

But the fun for mystery readers is precisely that it is unfinished. Dickens was influenced by his friend Wilkie Collins' hit The Moonstone and he thought he'd try his hand at a mystery plot. He's used crime and even murder elements before, but in Edwin Drood he seems to be constructing a plot with fair play cluing. And over the years, there have been plenty of attempts to say where those clues were going. But spoilers are impossible because nobody knows how it would have ended.

Edwin Drood is about to take a position in an engineering firm, a share of which he has inherited from his father. The job will take him to Egypt. He's also about to marry Rosa Bud as soon as she leaves school; they've been pledged to each other forever; their marriage was a favorite plan between their fathers, both dead now. But Rosa and Edwin can't seem to do anything but quarrel when they actually meet. And before Edwin's disappearance, Rosa tells him it's not a good idea they get married.

It's Edwin who is dead or missing when the book breaks off.

His best friend and closest relative is his uncle John Jasper, only six years older than Edwin, a church musician, and an opium addict. Edwin doesn't see it, but Jasper is also in love with Rosa.

Two other orphans, Neville and Helena Landless arrive in Cloisterham, the town where Rosa goes to school and Jasper leads the church choir. They're taken in by Mr. Crisparkle, a minor canon of the Cloisterham cathedral. They're from Ceylon (Sri Lanka) and are half of Indian ancestry. As Eurasians they're immediately subject to local prejudice. Neville immediately finds Rosa attractive and Edwin thinks the same of Helena, but this is intolerable, and Neville and Edwin end up in a brawl practically as soon as they meet. Boys.

Edwin's watch and tie pin are found at the edge of a weir, but there's no sign of him.

So the question is: is Edwin Drood dead? Or did he just disappear of his own free will? And if he's dead, who killed him?

I think it's pretty clear Neville is the first red herring. He's simply too obvious, and Dickens is too sympathetic to the downtrodden to make him actually the perpetrator.

In John Forster's biography, quoted in the introduction to my Penguin edition, Dickens muses about about a plot where an uncle kills his nephew, and is given a big scene in his condemned cell at the end of the book. Angus Wilson, author of the introduction is inclined to accept that as the plot outline. It is true that Dickens has used the prison cell scene before to great effect: think Fagin at the end of Oliver Twist.

This is a perfectly possible outcome, but I don't like it, for two reasons: 1.) the way Jasper behaves when he learns that Edwin and Rosa have called it off. He's clearly shocked, but is he shocked in the way he would be if he'd just learned he committed a murder that was unneeded? I don't think so. It's an idea that occurred to Dickens according to Forster, but I don't think he'd handle it this way if that was where he was going.

And 2.) Dickens typically shows sympathy for the addicted. He might, of course, feel differently about opium addiction than alcohol addiction, but I keep thinking of the alcoholic Sydney Carton (of Tale of Two Cities.) I think he would have allowed Jasper to redeem himself, though it would likely be at the cost of his life. Mr. Wickfield (in David Copperfield) is another example. Dickens' world view became darker as he aged, but he still seems to me to sympathize with Jasper, and I don't think he'd make him the murderer.

So if I don't think Neville Landless killed Edwin Drood, and I don't think John Jasper did so either, what was Edwin Drood's fate? I think he's still alive. In the notes reproduced in the back of the Penguin, Dickens writes, after trying out various name possibilities for Edwin, "Dead? or alive?" I think Edwin left the country to discover what he thought about Rosa, and wanted to be anonymous when he left.

I suspect Edwin would need to be returned to England at the end of the novel, possibly to save Neville from a false charge of murder, and it will have to be Jasper that does it, probably at the expense of his life somehow.

But who knows? Your guess is as good as mine.

Golden Age. Moon. That's a moon on the cover. It's a detail from A Moonlight Scene by Atkinson Grimshaw according to the back cover of my Penguin. My Reader's Block Vintage Mystery Scavenger Hunt.
Posted by reese at 2:50 PM