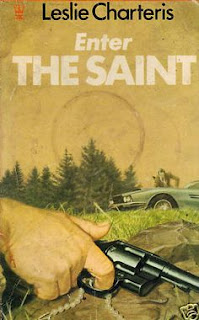 Enter The Saint is a collection of three novelets that came out originally in 1930 and is actually the second Saint volume by Charteris. Still, "...at the date of the Ganning episode [the first of the novelets] the Saint had only just commenced operations, and his name had not yet come to be surrounded with aura of infallibility which it was to earn for itself later."

I call them novelets because that's what Charteris calls them in the interesting introduction to my 1971 reprint. Forty years of Saint stories, novels, movies, television shows, radio plays, comic books, and stage plays are in the middle. Charteris tells us there are things he would have done differently. Obviously he did something right...

Simon Templar, AKA The Saint, inherited enough money from somewhere never really specified, enough to live, had he wanted to, the life of a luxurious playboy. Instead he craves adventure, and he has a Robin Hood streak that compels him to use those adventures to steal from thieves and give the proceeds to charity. Less his 10% for expenses. As a Robin Hood, he's got a Maid Marian, a Will Scarlet, and a Friar Tuck on his team. He's a stylish and debonair vigilante.

"...the flippant dandy with the heart of a crusader, a fighter who laughed as he fought, the reckless, smiling swashbuckler, the inspired and beloved leader of men, the man born with the sound of trumpets in his ears."

Charteris doesn't want you in any doubt who his Saint is.

In the first of the episodes he comes across a nice young man who's unfortunately gone a bit wrong, getting himself tied in with gamblers who run a drug running ring on the side. The Saint takes care of that ending with a car chase from Central London to Edgware in a Furillac.

The second sees a fake policeman stage two kidnappings; naturally the Saint decides he, too, should have one of his gang play a policeman to confuse the crooks. The car chase this time involves a Desurio, and goes further afield, to Dartmoor. Inspector Teal of Scotland Yard is queried to discover what the game is for; the crooks are delivered to Scotland Yard, and the loot has its own trip to make. Inspector Teal is once again allowed to clean up.

The last story doesn't involve some imaginary make of car, but a yacht and a seaplane; a group of rich men and their jewelry-wearing wives are lured on the yacht in a scam that, if all went well, was going to relieve them of their jewels and money. All does not go well, unless you're counting for the Saint.

I've read a bunch, but not all, of the Saint stories, and I thought these were very good outings, quite enjoyable. The Saint's flippancy can be insufferable, but that's pretty much by design.


"It is thrilling enough for a boy to skirmish with imaginary savages in a stalk through the woods. Later he will discover much quieter and deadlier monsters, while at the same time he is reaching towards the stars."

I don't know whether that's a Desurio or  Furillac or maybe just some muscle car from forty years after the date of the stories, but it is: