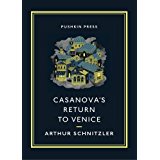 Casanova (yes, that Casanova) has been exiled from his home town of Venice for general bad behavior and he's now a middle-aged man of fifty-three; his looks show the fast life he's been living, as does his pocketbook. All he wants to do, he says, is get back to Venice. There's a chance his friends at home will be able to undo his exile, and he's living in a cheap inn in Mantua near to Venice waiting for what he hopes will be a favorable letter.

While he's waiting he runs into Olivo, an old friend and now a successful vintner, whom Casanova had helped to set up once upon a time and with whose wife, Amalia, he slept before Olivo and Amalia were married. Olivo invites Casanova to his vineyard estate at least for those days he's waiting for the letter. Casanova reluctantly agrees.

Casanova is an aging lecher who says all he wants to do his write his pamphlet against Voltaire and go home, but once in the country, there is Amalia, still longing for Casanova, Amalia's daughter, the neighboring Marchesa, and above all Amalia's niece to provide temptations and engender plots.

Schnitzler was an Austrian playwright and novelist with his first works appearing in the late 1800s. He's perhaps best known for his play La Ronde, with scenes in which A has just slept with B, B with C, and so on up to J, completing the circle at the end when we learn J has slept with A. It was made into a movie a couple of times. This earned him no friends in conservative circles, but Schnitzler was enormously successful at the time. Writing about Casanova hardly qualifies as a breach of taste for him.

This work has a melancholy charm to it that was appealing. Casanova is neither condemned exactly, nor praised. He is, however, left lesser than he started. He's thinking of a literary career, a polemic against Voltaire that will make his name, but which everyone knows will go nowhere. His famous work, yet to come at the time the novella is set, The Story of My Life, is alluded to. Without that, Casanova would probably be no more than a curious footnote instead of the catchword for his type.

The work came out originally in 1918. (This translation is from 1930 by Ilsa Barea.) I don't know what happened to Schnitzler during World War I, but I have to assume the melancholy tone is influenced by the time of its writing.

Near the top of my reading pile at the moment is Italo Calvino's Invisible Cities, the story of someone else (Marco Polo) longing to return to Venice. It might make an interesting comparison.