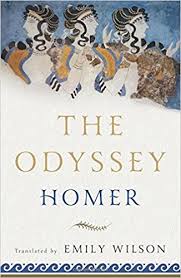 Well, publicity departments do what they have to, of course. But it should be getting buzz because it's very, very good.

One of the signs of the buzz it has been getting is that it's featured in the window of my local science fiction/fantasy bookstore. Which makes sense, really. It is a fantasy adventure story with monsters and pirates and gods. It's also got one of the all-time great love stories, too. Plus that bit about a young man growing up, a sort of YA opener.

And Emily Wilson's version brings all that across more clearly than any other English version I've read. It's a clear modern English that still feels like poetry. (She writes in blank verse.) Very highly recommended, though treat the introduction as if it were an afterword. You can read the Translator's Note in advance.

From the end of that Translator's Note:


There is a stranger inside your house. He is old, ragged, and dirty. He is tired. He has been wandering, homeless, for a long time, perhaps many years. Invite him inside. You do not know his name. He may be a thief. He may be a murderer. He may be a god. He may remind you of your husband, your father, or yourself. Do not ask questions. Wait. Let him sit on a comfortable chair and warm himself beside your fire. Bring him some food, the best you have, and a cup of wine. Let him eat and drink until he is satisfied. Be patient. When he has finished, let him tell his story. Listen carefully. It may not be as you expect.

And the first line of her translation:


Tell me about a complicated man.