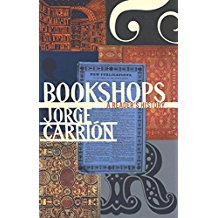 Jorge Carrión is, among other things, a travel writer, and this volume is, among other things, a volume of travel, travel to bookshops. He imagines a passport which has, instead of the stamps of countries, the stamps of bookshops he's visited and there are bookshops in Buenos Aires, in Istanbul, in London, in New York, in Sydney, in San Francisco, in Santiago. He himself lives in Barcelona and, of course, there are bookshops he's visited in Barcelona. He describes the layout, the shelves, the windows, the signs, and most importantly, the stock.

That, of course, is one of the great pleasures of this book for a book lover: the thought of all those bookshops one (I) could go to. The ones I have been to (say 57th Street Books in Chicago) I now want to revisit; the ones I haven't, well, I've made a list.

But there's also a melancholy tone to the book. Carrión emphasizes early on that book selling is a business even though we as book lovers don't always want to see it that way. I may have been known to hoard a book or two that only my heirs and assigns will ever be able to get rid of, but by definition that can't be true of a bookseller: if they don't sell books they don't last in the business for very long.

And plenty of bookstores fail anyway. Increasingly as his book goes along (and as his writing of it went along--he seems to have been working on this book over the course of ten years) the bookshops he once visited have closed.

Bookstores also take on other functions. He introduced me to the Spanish neologism cafebrería, that combination of a coffee shop and bookstore, a word that could usefully be imported into English. Of course it's a business and one does what one has to. Are these lists of the world's most beautiful bookstores any longer about books? Or have they become tourist destinations? If selling is necessary then can we complain when booksellers do what it takes? Carrión does not take a stand, but only brings up the question.

Anyway, enjoyable, even if I just lost an hour Googling bookstores that no longer exist where I've spent my time and money...