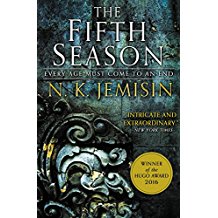 N. K. Jemisin's The Fifth Season is the first of a fantasy trilogy that takes place in a seismically active mega-continent. The third volume The Stone Sky came out last fall, which is how I heard of it. In this world, there are people who are attuned to this seismic activity and are able to manipulate it, both with conscious intent, but also as a side effect of their emotional state. With training their control can improve and can be used by others. These people are called orogenes.

Then there are normal humans,  also called stills, who are mostly indistinguishable from orogenes. (There are also stoneeaters, though who exactly they are and what their intentions are remains a bit mysterious in the first volume.)

The orogenes are feared and dreaded by the rest of society; they're either enslaved for their power, or neutered if that power can't be controlled. A few manage to escape to the margins of society, but not many and not necessarily for long. The orogenes are derogatorily called roggas (sounds like...) and I assume the experiences of N. K. Jemisin, the black woman author, inform the role of orogenes in this world's society.

The novel is told in three interlocking time streams which tie together quite successfully in the end. I didn't anticipate the connection and I'm going to avoid saying too much to spoil the surprise. The fifth season is death, a world cataclysm, and in one of the threads, it's started and people are fleeing; in another two mature orogenes are doing what they can until the fifth season is full in swing; the third is the story of a young orogene as she discovers her powers and is taken away to have them trained and/or controlled.

I thought it was very good and I immediately put the second and third volumes on my library hold list, but I'm a little late to the game so I'm going to have to wait. I thought it was very powerful. In some ways it compares to a common trope in fantasy novels, a young person, probably from the provinces, discovers that she has magical talents. Those talents are powerful and can be an object of dread to family and society. Think Wizards of Earthsea or, one I just read fairly recently, Mercedes Lackey's Arrows trilogy. In that young Talia escapes a provincial fundamentalist society to use her power. Demaya is the corresponding character in The Fifth Season and  Jemisin is much more brutal and much more convincing about the complex psychology such a person would feel. She's also much stronger on the relationship between society and the individual.