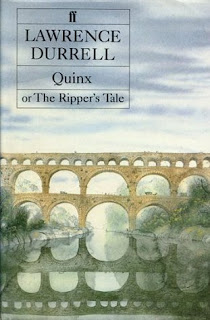 Quinx is the final volume in Lawrence Durrell's Avignon Quintet and the last novel he wrote (1985). I read the first ones a while ago, but slowed down in reading them. I've just now finished the series.

But neither the Alexandria Quartet or the Avignon Quintet are, in fact, monomaniacally preoccupied with sex. Just maniacally. There's a lot of other things going on, too. Durrell was a skilled travel writer; both series make good use of place. Both have thriller plots and secret societies.

And both have philosophical underpinnings: in the later work, Durrell is interested in Gnosticism, and uses it to complicate his structure. In a Gnostic world, we deal most immediately with a malevolent creator god; the true god lies behind that and does not directly affect our physical world, and only by learning, by knowing (gnosis) can we come to perceive that true god. For a Christian gnostic, that true God is Christ. In the first volume of the Avignon Quintet, (Monsieur) we start with a story about a love triangle in the south of France; it involves a novelist Sutcliffe; by the end of that first novel we learn the story we started with is written by a novelist character Aubrey Blanford as a sort of roman-a-clef. And in case we didn't make the connection, the last lines of the first novel remind us "D. begat Blanford" who then begat Sutcliffe and the other characters.

Your mileage may vary with this sort of thing. It can quite easily fall into pretension, and I'm afraid I felt it did. And the final novel was the most impressionistic, most discursive in its style. There's a lot of verse in the last volume, spoken by more than one character. Durrell tells us he's got a plan. In the words of Aubrey Blanford:


The old stable outlines of the dear old linear novel have been sidestepped in favor of soft focus palimpsest which enables the actors to turn into each other, to melt into each other's inner lifespace if they wish. 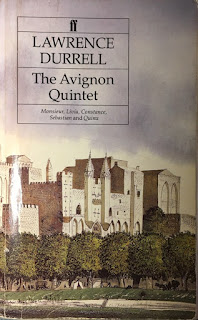 With a strategy like that, you can't expect characters, a thing I'm retro enough to like in a novel. And, I have to say, there were times I was so put off by this novel series, I wondered if I had been right to like the Alexandria Quartet, which at the time I read it I really did. Have you ever read some book by a subsequent author you disliked so much that it made you question the earlier book you liked? Not a comfortable feeling.

In the end, though, there was enough in this to get me to finish it. Do I recommend it? I'm afraid I can't. I expect, I hope--unless I was really mistaken about the Alexandria Quartet and it wasn't good--that this was a mistaken attempt on the part of Durrell to capture that same lightning in a second bottle and it was doomed to failure.
Posted by reese at 1:14 AM