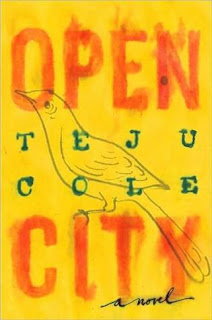 Julius, the narrator of Teju Cole's Open City, walks around Manhattan, visits an old professor of his, goes to Belgium in winter, possibly with the idea of finding his grandmother, but he doesn't try very hard. Instead he talks to whoever he meets; those conversations are mostly reported indirectly. He visits a few monuments in New York City. The old professor dies. Not much happens.

In this, Teju Cole's novel Open City is like one of Cole's clear model W. G. Sebald, maybe most particularly The Rings of Saturn. There is a quiet melancholy in both novels, an indirect reminiscent look at the injustices of the past.

I had read Sebald in the past and I was interested to see how another writer might use the example of Sebald without writing a pastiche. I'm not entirely sure Cole succeeds, but it's an interesting attempt.

The difference, I think, is that Cole is angrier, or, at least, lets his anger show more. Cole touches on a number of real injustices--Japanese internment, the Holocaust, slavery, the Global War on Terror, the difficulties of Muslim immigrants in Europe--and it's just this makes Open City feel overdetermined. The plot, such as it is, is constructed not to miss a one. Sebald limits himself to the injustices shown to Jews in Germany that lead up to the Holocaust, but he mixes it better with the simple melancholic pleasures of remembering and the occasional delight in odd bits of learning, some of which I think Sebald simply makes up. There are things to be angry about in the world, but to be consumed by them is in no one's interest. Sebald better manages that balance.

I read the book now--it had been on my shelf for a year--because he was coming for an interview at the main library in Toronto. In person he has a sense of humor, but that sense of humor is not to be found in Open City, I thought. He referenced Sebald as a writer whose handling of injustice he admired.

Anyway, interesting. I'd read another novel by him.
Posted by reese at 6:45 PM