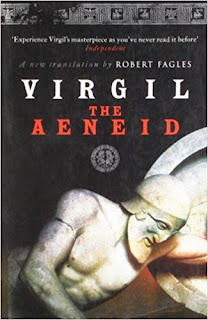 There was read-along of the first half of the Aeneid at the blog Mirabile Dictu earlier this year, and, though I didn't actually feel bold enough to contribute, I did read along. She intended to read the second half as well, but it hasn't happened yet, so I went ahead and finished the translation. Maybe if she'd had more active participants and fewer lurkers, she'd have scheduled the second half.

Some time ago my father asked me why I needed so many translations of the Aeneid and I didn't have a very good answer. I still don't. And I probably didn't have this one when he asked; this is my sixth and it was the only one I hadn't read at least once when the read-along started. I don't know why I thought I needed it. There's a short answer to that: I almost certainly didn't.

But it did get good reviews at the time and I can now say deservedly so.

And that's not counting the various editions in Latin. I still have my high school textbook, much beaten up. We read four books out of the first half in high school; Mr. Raispis, my Latin teacher that year, had us wear black crepe armbands for the death of Dido and would reward success in class with Jolly Rancher candies. I have a St. Martin's commentary for the second half of the Aeneid; I read four books out of the second half for an undergraduate class, not including the night-time raid of book nine, because that professor, the favorite of my undergraduate years, found Nisus and Euryalus tiresome. (Book X of the Iliad with Dionysus and Odysseus is much more fun.) She had gone to Stanford to study with the noted Virgil scholar Brooks Otis, but Otis had moved on to Tacitus by the time she got there, so her thesis was on Tacitus. I read some more, I forget exactly how much or which parts, as a graduate student.

So I ought to be able to say something, but I still don't have much to say. (Filling up this post with a bit of potted biography instead.) But:

One of the great questions of recent (recent meaning fifty years in classical scholarship) is to what extent was Virgil subverting expectations (of the man paying his bills, indirectly the Emperor Augustus) and calling into question how good a thing the Roman empire was. Reading Fagles' translation I was more sympathetic this argument than I sometimes am. It's especially noticeable in Book X. This may be Fagles' interpretation, though. (This question would never have occurred to John Dryden, author of another of my translations, in 1716.)

And also I wondered if Fagles was a secret Canadian. From Book 7: