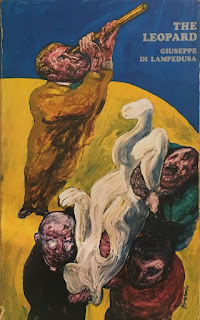 And no, I don't mean that appalling cover on my Time/Life edition of 1966.

Giuseppe di Lampedusa's novel The Leopard came out in Italian in 1958, and in an English translation by Archibald Colquhoun in 1960. Di Lampedusa died in 1957 and had garnered nothing but rejections (Mondadori, Einaudi) at the time of his death. It went on to become the second great success of the then-new publishing house Feltrinelli. The first was Doctor Zhivago. (Publishing details from Carlo Feltrinelli's biography of his father.) It is Giuseppe di Lampedusa's only novel and it won the Strega Prize (Italy's premier book prize) for its year.

The Leopard is the story of Don Fabrizio, prince of Salina. A leopard is the sign of his house, and the house owes its loyalty to the Bourbon kings of the Two Sicilies. But the main events take place in 1860, and the Garibaldini have just arrived on the island; it's the opening event in the successful reunification of Italy and the fall of the Bourbon kingdom. Don Fabrizio is not especially impressed with the Bourbon kings, not the father who died recently, nor the son, but he knows them personally and they are his kings. But his nephew Tancredi puts a red cockade in his hat and runs off to join Garibaldi's invasion, and Don Fabrizio isn't put off by it, both because Tancredi is his favorite, even more than his own children, and because it's a sort of insurance. As Tancredi tells him (a famous quote): "If we want things to stay as they are, things will have to change."

And things do both stay as they are and also change. Sicily remains hot, dusty, and dry--and impoverished. But Tancredi marries not his cousin, Don Fabrizio's daughter, but the beautiful and rich Angelica, daughter of the corrupt (but successfully so) mayor of the town where Don Fabrizio has one of his estates. Don Fabrizio says of the father: "his family is an old one, I am told, or soon will be." In fact Angelica's maternal grandmother was an illiterate peasant on Don Fabrizio's estates and may very well have been murdered, as an embarrassment, by his rising son-in-law.

But the book is also quite funny. Both the narrator and Don Fabrizio employ a dry irony; Tancredi, too, picks it up from his uncle. Of Concetta, the daughter Tancredi didn't marry, the narrator says:


...a nephew of hers, having caught sight in some book or other of a picture of the famous Czarina, used to call her in private "Catherine the Great": an unsuitable name made quite innocent by the complete purity of Concetta's life and her nephew's total ignorance of Russian history.

But also sad. Sicily does not change; the poor remain poor; Don Fabrizio, sophisticated and learned, but saddled with estates he can do nothing with but sell off piecemeal, is replaced by a grand-nephew totally ignorant of Russian history. When a representative of the 'Piedmontese,' the king of a now-unified Italy, Victor Emmanuel, comes and offers Don Fabrizio a seat in the newly constituted Senate, Don Fabrizio refuses, for nothing can be done with Sicily. "They never want to improve. They think themselves perfect. Their vanity is greater than their misery."

And so it goes. Highly recommended.

My reading the book right now was completely overdetermined: I had made it a Classics Club choice, a Back To The Classics choice, and it fits my Monthly Motif challenge, a book made into a film. It's a great Luchino Visconti film, with Burt Lancaster as Don Fabrizio and Claudia Cardinale as Angelica.
Posted by reese at 9:22 PM