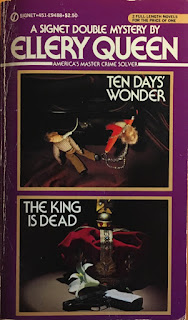 Ten Days' Wonder is an Ellery Queen mystery from 1948. Though it starts briefly in New York City, it quickly becomes a Wrightsville mystery, that small New England town where Ellery has to do without his homicide detective father, and all of his father's apparatus.

Howard van Horn is suffering from something at the beginning of the novel and is subject to amnesiac spells. What is that something isn't quite clear, but it's clear he is suffering. After the latest spell he ends up in a Bowery flophouse; on coming back out of it, he hunts up Ellery to ask his help. Ellery agrees to go to Wrightsville.

It's clear to Ellery from the very beginning that Howard is hiding something.

In the immediate postwar period, the cousins Frederic Dannay and Manfred B. Lee became interested in psychotherapy; it was in the air; psychotherapeutic analysis in general takes off in the U.S. at the time. The first DSM manual of mental health is issued in 1952, for example. There are several Ellery Queen novels in which psychotherapeutic explanations are important; in the next Ellery Queen mystery, The Cat of Many Tails, one of the main characters in the mystery, Dr. Cazalis, is a psychologist.

In fact Ellery turns out to be quite wrong in this one for a long while. Dannay and Lee use Ellery himself to supply wrong theories as a red herring not infrequently. It's sometimes said this is a feature of middle period Ellery Queen, and it is, but it goes back at least to The Greek Coffin Mystery. The consequences of Ellery's errors, though, are greater in the mysteries of this period, and especially in this one. Indeed, Ellery says at the end to the murderer, the actual murderer, "You've damaged my belief in myself. How can I ever play little tin god? I can't. I wouldn't dare.... You've made it impossible for me to go on. I'm finished. I can never take another case."

Though, of course, he does. This scene occurs early in that next novel, The Cat of Many Tails:


"I don't want to hear about a case," Ellery would say. "Just let me be."
"What's the matter?" his father would jeer. "Afraid you might be tempted?"
"I've given all that up."

But then his father gets assigned the case of the Cat, and Ellery is lured in.

Anyway, Ten Days' Wonder is very satisfying. I did find the psychology a little heavy-handed here; it's handled with more subtlety in other Queen novels. There's an ill-conceived project that Ellery goes along with for a while; the last step in that project, it's hard to see how or why he would. Still the final reversal was very good and very well setup. Recommended.

And surprisingly the cover was actually designed by someone who had read the novel. Oh, dear, I want to say why that cover's so good, but anything I can think of to say, feels like it might be a bit spoiler-y. In any case, that is a:

I have the feeling I've read this one before, but the computer says I haven't, and since the computer never lies, it's also...a Mount TBR book.
Posted by reese at 11:56 AM