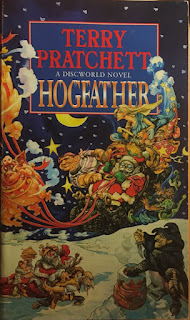 Hogfather is Terry Pratchett's statement of Christmas spirit. Pratchett is rather a sentimental satirist, and while in this he's making fun of many of the accompaniments of Christmas that message of Peace (and a little benevolent chaos) on Earth and Goodwill to All is a thing he will want to affirm.

The basic setup is this: the Hogfather is the book's stand-in for Santa Claus and somebody wants to murder him. They hire an Assassin to do the job. How do you murder a myth, assuming the Hogfather is a myth? Well, you get people to quit believing. So somebody has to act the part of the Hogfather/Santa Claus character, convincing the children he does exist, until the case can be unraveled, and the spreader of skepticism and cynicism discovered. Then the children can go back to their belief.

The someone who decides to act the part of the Hogfather is Death, a recurring character in the Pratchett Discworld universe. His granddaughter, with various helpers, tracks down the assassin and reveals the plot. They succeed, and the Hogswatch holiday is saved.

I thought this was a relatively weak entry in the Discworld series and that was sad, because Pratchett's Death is one of my favorite characters in the series. The plot in this was too complicated, with mysterious tangents to it. We see very little of the Assassin's interaction with Christmas things and far more with the Tooth Fairy. I'm not entirely sure why that happened.

Also, while I don't usually assign too much import to the old MFA bromide "Show, Don't Tell," it could have been applied here. One of the best things about the character Death is his desire to give up the scythe and long black robe and live a more normal existence. He's curious about human lives, but has this, umm, well-defined relationship with humans that keeps getting in the way. In previous books in the series, this provides a number of comic situations. But here we kept being told about Death's characteristics, mostly by his granddaughter, rather than seeing them in their funny excesses.

Anywho...amusing enough, but I had higher hopes.
Posted by reese at 4:20 PM