Ngaio Marsh's Tied Up In Tinsel 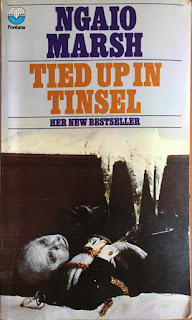 I was looking at a list of Christmas-themed books and realized I already owned this and hadn't read it. Good enough! It moved to the top of my chair-side pile.

Tied Up In Tinsel (1971) is a late Inspector Roderick Alleyn mystery by Ngaio Marsh. Alleyn himself is rather late in arriving in this one--he's wrapping up a case in the Antipodes--and is represented by his wife Troy, who is doing a portrait of Hilary Bill-Tasman, the owner of the country house where events take place.

The story starts in the days leading up to Christmas as guests arrive and it will culminate with a rather pagan festival in which Bill-Tasman's uncle Fred, dressed as a druid, pulls a sleigh loaded with gifts off the lawn and in through the French doors for the waiting children of the neighborhood.

It's a country house murder. Just in case you were worried about outsiders sneaking in, the house is surrounded by new-fallen snow that evening.

The most amusing thing about this is in the early setup. Bill-Tasman has just bought and restored the old family estate; he needs servants for it; but servants are expensive and hard-to-find. So Bill-Tasman hires released murderers, not habitual murderers, but 'oncers', because he can claim to be rehabilitating them and because they're cheap. Do you smell red herring, whatever that might smell like? Me, too.

Uncle Fred's valet goes missing after the Christmas performance. A bloodied poker is discovered, and then eventually the body.

Of course, Marsh adheres to the rules (Van Dine's #11) and it is not a servant who committed the crime, however murderous they may have been in the past. Which, I'm afraid, was the main problem with this. Quite a lot of the business in this was taken up with making the servants look possibly guilty. The formerly murderous servants are certainly convinced everyone will assume one of them is guilty. And the local constabulary as well as the guests do assume one of them is guilty. But Roderick Alleyn does not, and we don't either. So the middle of the novel is hard to take seriously and then the wrap up--there aren't that many guests in the house--is too swift. But Marsh is an old pro, she'd been writing these for almost forty years at this point, and the show must go on and does. (Theatrical double entendre definitely intended.) It's a success, though perhaps not her strongest.

That's Alf Moult, Uncle Fred's valet, on the cover, looking blue and frozen and quite dead in the snow in a story-appropriate, but not very appealing, cover photo for my Fontana edition.