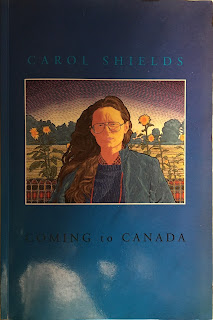 Coming To Canada is an autobiographical sequence of poems by Carol Shields from her birth in Chicago that ends when she moves to Canada, newly-married, at the age of 22. It came out in 1992.

The edition I have came is 1995 from Carleton University Press and includes selections from her first two volumes of poetry, other uncollected new poetry, plus an introduction by Christopher Levenson, a Canadian poet.

the anger from her look
or thunder
from her touch.

No one remembers
Aunt Ada much,
except she stayed home sick

on Sundays, rebuked
God, did her work
and grew a little kinder.

I suppose I could make sure you notice the rather sly slant rhyme scheme.

Levenson, in the introduction, almost, but doesn't quite, blame Carol Shields for being so impersonal. Titles of other poems (not from the sequence) include things like "Our Old Aunt Who Is Now In A Retirement Home" and "A Friend Of Ours Who Knits." I think I actually preferred these kind of impersonal poems. Or there was this:


A Physicist We Know

Even while
we talk, he abstracts
himself, making terrier
leaps of speculation
on the quiet.

His smile
is detached and social,
disenfranchised by
his secret alphabet
of air.

Occasionally
he emerges in fractions,
lopsided with camaraderie,
looking rather hysterical
and frantic.

Then we see him sympathetically
as an exile
and don't dare
ask, is it lonely in there?

"terrier leaps" and the closing particularly make that poem work for me.

Still there's no doubt that she's better known as a novelist, and for reason. Levenson's introduction spends at least as much time talking about her novels. I've read some, though not all, pre-blogging, and her biography of Jane Austen more recently. The last of her novels I read was The Stone Diaries, her most famous, so brilliant and so heart-breaking I haven't dared to read another since. I've long felt I need to, and am now beginning to feel I have the strength to, revisit that.