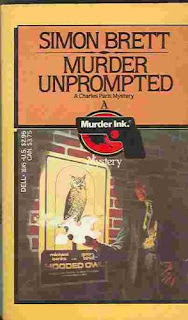 Murder Unprompted (1982) is the eighth in Simon Brett's series of murder mysteries with Charles Paris, a not particularly successful actor. Though, in this one, Paris ends up headlining a show in London's West End, so his streak of mediocre performances is maybe to coming to an end? But his streak of being on the scene for murders definitely does not.

The Hooded Owl is the debut play by an English schoolteacher and it needs to start somewhere and that somewhere is the sticks, Taunton, in this case. (With apologies to Taunton...I just tell it like I'm told. It looks like a nice city according to Wikipedia.) Charles Paris plays the second role, and Alex Household, with whom Paris becomes friendly, plays the lead. There's an ingenue, daughter of Household's character, and several other actors. The insecure author, the sleazy producer, the domineering director, various corrupt potential backers, the stage mother, all make an appearance.

But the play has legs, and makes the jump from Taunton to London's West End. Alas for our hero, the producer feels the two leads, while just fine for Taunton, haven't got the appeal needed for a London West End production; Paris is relegated to understudy for George Birkett, who first appeared in the last Charles Paris mystery Situation Tragedy, and Alex Household is replaced by, and made understudy to, a big star: Michael Banks. Naturally there's resentment, which only grows worse when Michael Banks can't remember his lines, and has to have them prompted to him by a radio device, with Alex Household being the prompter.

And then, on the opening night, right on stage, Michael Banks is murdered during the climactic speech of the play.

Of course, Alex Household, standing off in the wings on the side of the stage from which shot came, is the prime suspect. And equally of course, he didn't do it. If you're a mystery reader at all, you didn't need me to tell you that.

I thought this one was pretty good, and better than Situation Tragedy, the previous one and the last one I read. Situation Tragedy centred on a television show, and this one on a play; Brett writes better about theater than he does about television. I did rather suspect the murderer all along, though. The recurring characters that Brett uses in this series made their dutiful appearance: Frances, the estranged wife, was handled pretty well this time; Charles Venable, the solicitor friend, made a totally unnecessary appearance; Maurice Skellern, Paris' useless agent, supplied the occasion for a lame joke or two about useless agents; and Bell's whiskey appeared in the form of a particularly welcome gift bottle.

There's an owl on the cover of my edition, and it's crucial to the whole story: the play's the thing, and that play is called The Hooded Owl, and it's in the middle of a speech about an owl that the murder occurs. So it's what I'll use for the scavenger hunt. Bird is thus the first category that I've got on both Golden Age and Silver Age, and if you'd asked at the beginning of the year, I certainly wouldn't have picked that.

It also counts for me for My Reader's Block Mount TBR Challenge.
Posted by reese at 1:34 AM