Now that I'm on target is the moment that my boss would start talking about stretch goals. Ha! 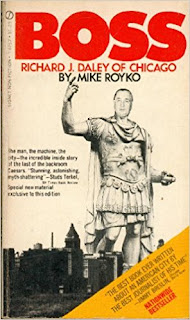 Definitely the longest on my TBR list is Boss by Mike Royko. It was sometime in the late 90s I started recording when I bought books, and this was there before that. But the story gets even worse: There was a bookstore in Chicago near where I lived, and the owner would write the date he acquired the book and its initial price. If it didn't sell after some period of time, he marked a second date, cut the price to a quarter, and moved it to the back room. A second demotion was possible; he sometimes cut the price to a dime. My copy of Boss got moved to the back room in September of 1986 (7/86) and was priced at a quarter after being 50 cents for eleven years. I suspect it entered my library not too long after that. My copy of the book has done some traveling, from Chicago to San Francisco, and now here to Toronto, where it finally got read.

Boss is the story of Mayor Richard J. Daley (the first Mayor Daley) of Chicago, the epitome of Machine politicians. It came out in 1971, while Daley was still alive, and while Royko can occasionally admire Daley's hubris and ability to wield power, that's about as far as it goes. It's an attack.

And I kind of knew all that. After carrying it around for probably 30 years, there really weren't any surprises for me, even though I hadn't read it. My dad read it; he must have read it close to when it came out, and there was a copy around the house when I was growing up, identical to the one I bought later. My dad thoroughly endorsed Royko's attack on da Mayor (as everyone called him) and was known to point to the book when needed. In Chicago when I was a kid, you were either a Machine Democrat or a non-Machine Democrat. We lived in one of the so-called Lakefront liberal wards, and we were the latter. Republicans lived in the suburbs.

I read Royko's columns as they came out: my parents switched their regular daily newspaper from the Chicago Daily News to the Chicago Sun Times to the Chicago Tribune as Royko switched from newspaper to newspaper. Not exactly because of Royko, but for the same reasons that Royko switched: the Daily News, the non-Machine, liberal paper, folded, and we moved to the Sun Times. Then the Sun Times was bought by Rupert Murdoch and became very right wing, and so it was time to forgive Colonel McCormick's right-wing imbecilities, and try the Tribune. (McCormick had been dead for 30 years by then. Forgiveness can be slow.) 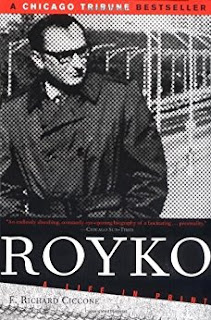 Even though I read his daily column in the paper, I bought all the collections as they came out and read them, too. A few years ago, after Royko died, both my dad and I read Ciccone's biography of Mike Royko. Ciccone was a fan, but was at least capable of noting Royko's family difficulties and self-destructive drinking. Those things didn't matter in the end to Ciccone and didn't matter to us either.

Anyway, all that's to say why I was unsurprised by the book. But I was reading some other Chicago books recently and thought the time was ripe, or more than ripe, to finally read Boss. As I said in the initial post, I wouldn't actually read this book to learn about Mayor Daley, and I wouldn't select the book as the best introduction to Mike Royko either, even though it's his most famous. But if you're a fan, or it's been on your shelf for 30 years and you're involved in a TBR challenge, well, then, it's a pretty good read.
Posted by reese at 5:49 PM