John Dickson Carr's The Man Who Could Not Shudder 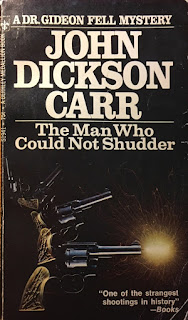 Martin Clarke has just bought a house famous for its haunting, and he invites six people to test it out as it were, to see if indeed it is haunted. Four of these people are his only friends in England--he has just returned from years as a commercial agent in Italy--and two others are friends of those friends. It will be an experiment: see how different personality types handle a haunting. Though, of course, they might see nothing.

Needless to say, they do not see nothing.

The next morning after they've all arrived a revolver (featured on the cover!) jumps off the wall, shoots and kills one of the guests. Two people see the inexplicable event, and are able to say that the other did not do it. Powder burns on the wall indicate the gun wasn't in anybody's hand when it went off. But there's clearly a dead body, and it seems likely it was a murder. How was it done? Was it the ghost?

Fortunately, the night before, somebody telegraphed to Scotland Yard; Inspector Elliot and Dr. Gideon Fell in his box-pleated cape and shovel hat are there shortly after the body is discovered.

From very near the start there's not much doubt as to who the mastermind of the affair was; it's up to Dr. Fell to discover by what agency the murder was committed. He does so. It's a wonderfully intricate solution that takes years (though under 200 pages) to fully reveal itself. "This is not Roger Ackroyd all over again," he says at one point. But for just a moment it looks like it might be!

His final conversation with the murderer:

This wasn't as delightful as The Case of the Constant Suicides in my rediscovery of Carr, but it was lot of fun, and the solution was far more convincing and mysterious. Recommended.