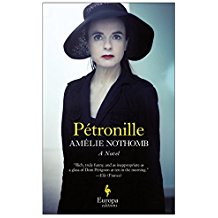 A couple of years ago, the movie Tokyo Fiancée played here at the Toronto International Film Festival and I went to see it. I think I'd heard of Amélie Nothomb before that--the film was based on one of her novels which may have been part of the motivation to see that movie in particular. I liked the movie so I thought I should read one of her books sometime.

Well, you know how that goes. It took a while.

I saw Pétronille at a local used book store that specializes in remaindered books, so I got it, but it didn't get read right away and it became part of the TBR pile. Then a couple of days ago that same bookstore had a different Nothomb available, Life Form, and I was going to get that one too, but I decided I should read the other first. (Wasn't that good of me?) So I did and I'm glad I did.

In Pétronille, a character named Amélie, a successful Belgian author now living in Paris (much like our author) decides she needs a friend she can drink champagne with. She meets Pétronille at a book signing. Pétronille is a fan of Amélie's work, but at that time is a graduate student doing research on Elizabethan drama. They seem to hit it off, but it takes one or two other cautious meetings before they become champagne-drinking buddies. Pétronille becomes a novelist in her own right.

Not a whole lot happens; this is not a plot-driven novel. But it is quite funny. The opening sentence gives a good idea of the tone. There's quite an amusing takedown of Vivienne Westwood, the British fashion designer from the punk era. The Amélie character is presented as socially reserved, even a bit diffident. At one point Pétronille suggests they use the informal tu instead of vous with each other; Amélie resists, even though, as Pétronille points out, they've slept in the same bed, and Pétronille has seen Amélie in her orange pajamas. Some of the humor comes from the tension between the diffidence of the Amélie character and the forthrightness of the telling of the story. I mean, she declares she's out to find a champagne-drinking buddy.

The novel takes a surreal turn at the end, the very last few pages. I'm not sure how I feel about that, but you do know that it's a novel.

Fun, and quite a quick read, only 120 pages. Now I'm hoping that pile of Life Form they had at the bookstore still has a copy or two left.

This is my first of Nothomb's novels. (Though it won't be the last.) Does anyone have any sense where this fits in? Is it an especially good one (or poor one)? Favorites?
Posted by reese at 5:29 PM