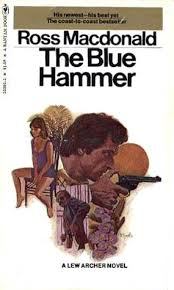 The Blue Hammer was Ross Macdonald's final novel. It came out in 1976. Lew Archer, P.I. and the usual protagonist of Macdonald's novels, is hired to recover a painting stolen from copper magnate Jack Biemeyer and his wife. But there's more to it than that. On page eleven, Archer is already telling Mrs. Biemeyer, "This case looks a bit more complex to me than it does to you."

Naturally Archer was right. This ends up the longest of the Archer novels at 280 pages in my edition.

Macdonald was well-established by this point in his career and the book got mostly glowing reviews, except for one in the New York Times. And I like it, too. But in his book of interviews with Macdonald It's All One Case, Paul Nelson says, "I do think it's correct that anyone who read all of the Archer books would anticipate things in The Blue Hammer," and that's true, too. Nor does Macdonald deny it. A crime in the past is connected to crimes in the present; there are troubled children, and possibly more troubled parents; there are secrets in the family. In this one the family secrets are particularly complex, with two interlocking families. The main figure is Richard Chantry, a famous painter, who disappeared 25 years before, and whose illegitimate half-brother had been killed seven years before that. That's the crime in the past. In the present, two dealers in paintings are killed, one drowned, the other beaten. The theft of the painting was partly contrived by the Biemeyer's drug-addled daughter. That's the troubled child. And there are family secrets, revealed by the end of the novel.

Anyway, quite enjoyable, if not his best.

Paul Nelson asks him in It's All One Case: "One more book at least would you say is fairly certain?"

"Yes, I should round it off," Macdonald replied. Alas it wasn't to be.