Poem of the Cid 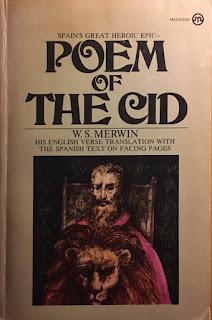 In my current quest to both read up about Spain and clear off my TBR pile, this volume did double duty. And if the question arises what book did I read this year that was longest on my TBR pile, this one will definitely be a strong candidate.

The Poem of the Cid (according to the back cover) was "written by an unknown Castilian around 1140, nearly a century after the birth of its hero." As the introduction points out, there could very well have been people alive who had known the Cid; still it feels like the world of legends.

Rodrigo Ruy Diaz de Bivar is the Cid, the successful military leader of a band of knights that fight the Islamic states at that time in the south of Spain; also he has to deal with enemies at court that poison his relationship with King Alfonso, and the beginning of the story finds him exiled.

I'm no expert and I'm a little reluctant to say much. I thought it was a good read as translated by the American poet W. S. Merwin. Only three points:

One, I was a bit surprised by the class elements in this. Rodrigo the Cid is aristocracy, but is looked down upon by the more high-born; when the king pushes his high-born enemies to marry the Cid's daughters, they're resentful and deliberately insult the Cid's daughters. I suppose it's a bit like Shakespeare's All's Well That Ends Well but his aristocratic enemies are much worse than Bertram is.

Two, it ends well for the Cid. Somehow that strikes me as unusual for a medieval epic. The Song of Roland, the Nibelungenlied, Beowulf all have a melancholic ending. The Cid is triumphant over his enemies. Be honorable, stick with your king, and things turn out well. That's the message.

And three, I read Guy Gavriel Kay's The Lions of al-Rassan about a year ago and quite liked it. I suppose it's not a surprise, but he really had the Poem of the Cid on his mind.  His Rodrigo Belmonte owes quite a lot to Rodrigo Ruy Diaz.

Alas, what was it about books printed in the seventies? The finally get the acid out of the paper so the pages don't yellow, but they were still being cheap about bindings. I've had this for years (though not since its publication date of 1975) but it did not survive even one reading. Pity, because I liked it and I would otherwise keep it.
Posted by reese at 11:44 PM