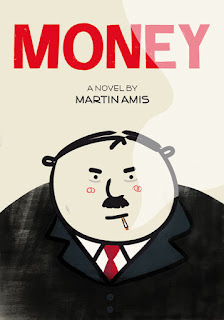 Ouch. That was a slog.

I don't usually give up on novels--I probably should do it a little more--but this one was so very close. They say it's funny, but I can't say it worked for me.

The story is this: John Self has been a successful director of commercials for a London advertising firm; he's about to make his first commercial feature-length film with mostly American actors. Those actors, the producer, various film financiers appear. There's also the complications of his love life. Self is a large man of large appetites, booze, food, sex. He's got a mistress, but still spends a lot of time with prostitutes, has to audition actresses (we all know what that means, post-Weinstein) and lusts after friends' wives. Does the film get made? Does he marry his mistress? Such are the questions of the novel, though I can't say I particularly cared.

Which is kind of too bad. When I was halfway through the novel, the reason I picked it off my TBR pile in the first place, Martin Amis gave a talk at the library here and I went. He's a funny guy in person with amusing riffs about James Joyce (Amis doesn't like him) and insightful ones about Vladimir Nabokov (whom Amis does like.)

And the fact that Amis was funny in person got me to finish the novel but as I said, it was a slog.

So I was wondering why Amis was so highly regarded?--since it couldn't be my taste was at fault. It's possible that he's a funny guy in person distracted. Amis started off famous--he was notorious in England both for his lifestyle and for the fact that his father was a famous novelist. (Kingsley Amis for Lucky Jim among others.) And maybe that meant people paid more attention to him, knew his droll persona, reading his novels as if they were Martin Amis talking in person. 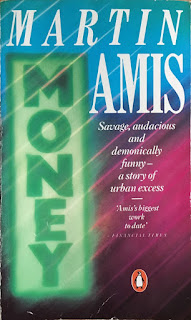 But Amis is a very literary writer, I'd say. More so than his father, who just lashes out, one of the original Angry Young Men. Martin wears his forebears on his sleeve: Vladimir Nabokov, Saul Bellow. Criticism of his literary forebears is the topic of his latest book, The Rub Of Time, which I haven't read, but what he mostly talked about. Money reminded me a little of Nabokov; Martin Amis the character shows up in the novel to watch a fellow national destroy himself in America, much as Vladimir Nabokov does in Pnin. Pnin is a much more human book, though, the most human I find of Nabokov's; Money is simply savage satire, of mostly too obvious targets.

But Money is much more homage to Saul Bellow than Vladimir Nabokov. It's a long first person novel, and it's Bellow's spiky narrative style that informs the way John Self speaks to the reader, but it's just not Bellow. I have a troubled relationship, let's say, with Bellow; his handling of female characters is problematic. But as an "American, Chicago born," The Adventures of Augie March meant a lot to me at one point. But whatever one might think of Bellow, Amis' prose is not there. The opening of Money only points up Amis' relative weakness.

Then there's the book cover. I led with the one above that I found on the Internet. That looks like a book one might want to read. I can't really say why I bought my copy, which has the cover shown below, and which I couldn't find anywhere so the photo is my own. The Internet couldn't be bothered to preserve that. Penguin, what were you thinking?

Anyway, one less book on the TBR pile. I can't say much more.
Posted by reese at 2:12 AM