Poem For A Thursday: Akhmatova 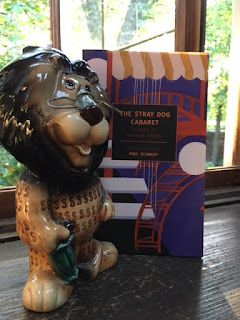 All of us here are hookers and hustlers.
We drink too much, and don't care.
The walls are covered with birds and flowers
that have never seen sunshine or air.

You smoke too much. There's always a cloud
of nicotine over your head.
Do you like this skirt? I wore it on purpose.
I wanted to show lots of leg.

The windows here have been covered forever.
Is it snowing out?...maybe it's rain.
You've got that look in your eyes again,
like a cat in a crouch for a kill.

Sometimes I feel this awful pain
as if someone were breaking a spell.
Take a good look at that one over there!
She's dancing her way into hell!

The Stray Dog Cabaret was an actual location in St. Petersburg where Akhmatova, as well as Blok, Mandelstam, Mayakovsky, among others, hung out in the years immediately before World War I. This poem dates from 1913.

Akhmatova lived on until 1966, though her first husband was executed by the Soviet police and her second died in the Gulag. She was nominated several times for the Nobel prize.

This poem has a certain happy bravado; that was not the norm in her life. This is from 1917:

This is the moment they told us would come some day
when there's nobody left alive to hear what we say.
The world is no longer the place it used to be.
Be still, don't break my heart. Be silent, poetry.

Jennifer is featuring Sylvia Plath this week. Brona has a timely Herman Melville.