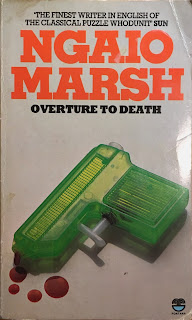 Overture to Death (1939) is a classic village mystery from the golden age: there's Jernigham, the master of the local manor house; his son; Copeland, a rather high Anglican rector; his daughter; the village doctor; the husbandless Mrs. Ross; and two absolutely impossible (but amusing!) spinsters.

You know what happens to the son and daughter, of course...

It's one of the spinsters who gets murdered, though there's a question if the other one was the target. The event takes place an amateur theatrical performance for the benefit of the local church. Miss Campanula sits down to play the piano for the overture, and well, consider the title.

I found this one very amusing; the two spinsters and their rivalry was very deftly handled, very amusing. The lovers were believably plagued. Marsh knows her theatre and her writing on casting and rehearsals was hilarious and altogether believable. The list of possible suspects was small and it was pretty clear who had done it, but the cluing was very well done.

Marsh wrote thirty-three mysteries involving her detective Roderick Alleyn and I've read ten or so; this jumped to the top of the list of those I've read, and the interwebs (at least in the form of the late mystery blogger Noah Stewart) seem to agree. Recommended!

An entry in the Just The Facts mystery challenge hosted by Bev at My Readers' Block.

Golden Age. When. During a performance of any sort. 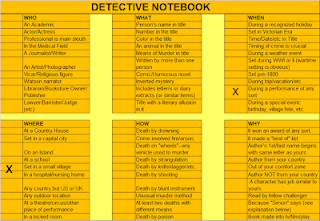