The White Plague by Karel Čapek 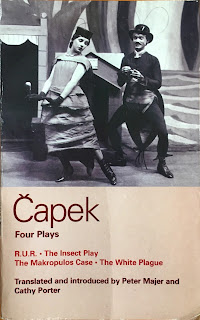 There's the debate at the moment, of course: read books about the plague, or avoid them like the... Mostly I've gone with the latter, but I pulled this collection off the shelf to read R.U.R. for the #1920Club, but then there it was: The White Plague, Karel Čapek's play from 1937, calling to me to read it. So I did.

I'd seen the play 30+ years ago in Chicago, but I didn't really remember the details. But, surprise! it does feature a plague. The first symptom is a white spot, frequently on the chest, but from there it proceeds rapidly to leprosy-like symptoms and within six weeks is fatal. It strikes people fifty and over generally.

But that's just the groundwork; it's not really a play about a plague, nor does the plague particularly serve as a metaphor for something else. (No Camus, here, or not exactly.)

Professor Sigelius runs a clinic; they're studying the disease and doing what they can for sufferers, but haven't gotten very far when in Act I, Doctor Galen shows up and claims to have a cure. It needs to be tested and he asks to work in the indigent ward. He refuses to try it on anybody else. Galen had been a brilliant researcher at the clinic years earlier, but then went off to work with the poor.

By Act II, it's clear Galen's cure does work. But he's still refusing to treat anyone but the poor. Unless they meet his conditions: stop the approaching war. Well, it is 1937 and Karel Čapek is a very endangered species at that time: a Czech democrat. The head of accounts at Krug Armaments first gets the disease and approaches Galen; Galen delivers his conditions, but he's just gotten this job. How can he give it up now? Then Baron Krug himself is stricken. Shut down the munitions factories. Krug won't, but then he will, before being ordered not to by the Marshal.

It's the Marshal who's behind it all:


Galen: You can do anything you want.

Marshal: I cannot. Must I explain it to you like a baby? Do you really think war and peace depend on me? I must obey the interests of my nation. If my people go to war, it's my duty to lead them to their destiny.

Galen: If it wasn't for you, they wouldn't fight in the first place.

Marshal: No they wouldn't. Now, thank God, they can fulfill their historic mission. I'm just the agent of their will...

Galen: Which you've whipped up.

Marshal: I've awakened their will to live.

In Act III, the Marshal is stricken by the white plague.

Does Galen's plan work? Well, 1937, in Czechoslovakia, was a tough time to be an optimist. But there are a few good twists at the end.

And like most things I've read by Čapek, there are also young lovers as well as a long-married bourgeois couple all affected by the events around them. While I wouldn't call it Čapek's best work by any means, I can see where it would play very well, which is how I remembered it.

And how about that crazed picture on the cover of my edition? That's from an early (perhaps the first?) production of The Insect Play by Karel Čapek, which is now the only play in the volume I haven't read.
Posted by reese at 4:10 PM