"Soames Forsyte emerged from the Knightsbridge Hotel, where he was staying, in the afternoon of the 12th of May, 1920, with the intention of visiting a collection of pictures in a Gallery off Cork Street, and looking into the Future." 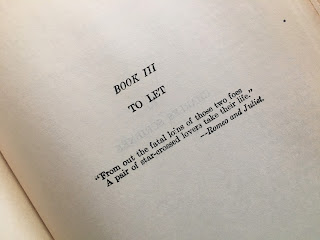 That's the opening of the third novel, To Let, of Galsworthy's The Forsyte Saga. Twenty years--and World War I--have passed since the events of the second novel, and the Future is that much more present--and ominous. "The new generation mocked at anything solid and tenacious."

At least for Soames. Painting has moved beyond even the Impressionists and post-Impressionists, which were nothing but blurs and dots anyway. Taxes are going up and Labour could be elected on a platform of the confiscation of all property, at least as Soames sees it. And his beloved daughter Fleur is now nineteen, and looking for new males to conquer. Her father is no longer enough.

We remembered, or, if not, we're quickly reminded, there are two strands of the Forsyte family that don't get along at all: cousins Jolyon Forsyte and Soames Forsyte. Soames Forsyte is still absorbed in the idea of Irene, his first wife, who went on to marry Jolyon. Indeed there are two and only two women in Soames' life: his ex-wife Irene and his daughter Fleur. His second and current wife Annette exists on a distinctly lower plane.

Jolyon has a son, another Jolyon, called Jon, who's the same age as Fleur, and as that epigraph from Romeo and Juliet,

ought to make very clear, they're destined to meet and fall in love. Of course in Shakespeare, 'take their life' has a double meaning. Does it in To Let? Well, that would be telling.

Neither young Jon nor Fleur have any notion of the nature of the quarrel; at the beginning they barely know they even have these cousins. Various adults suggest they need to be told, but they aren't, and the lure of the forbidden only adds spice to the romance between these two eighteen-year-olds.

Unlike in Romeo and Juliet where the nature of the feud is largely unexplained--chalk it up to the sort of clannish political rivalry found in Renaissance towns--we know perfectly well why Soames and Irene can't bear the sight of each other. The drama is driven by how Future discovers the Past still exists and will impact its Present.

I thought this was very good, better than the second and as good as the first. (Well, a middle novel. What can you do?) Soames is rather a villain all the way through, uncertain to himself why, and certainly unable to articulate it. But I felt the second novel rather stacked the deck against him, while in the this one he was once again able to make his own mistakes.

Now I need to see the BBC mini-series version.

One other thing I wanted to note. I briefly alluded to it in my first post on the saga, and that's the prose. I mostly think it's pretty effective, but there are certainly some odd quirks in how he handles free indirect discourse:


"Where was Annette? With that chap, for all he knew--she was a young woman! Impressed with the queer charity of that thought, he entered the summerhouse and sat down. The fact was--and he admitted it--Fleur was so much to him that his wife was very little--very little; French--had never been much more than a mistress, and he was getting indifferent to that side of things! It was odd how, with all his ingrained care for moderation and secure investment, Soames ever put his emotional eggs into one basket. First Irene--now Fleur. He was dimly conscious of it, sitting there, conscious of its odd dangerousness. It had brought him to wreck and scandal once, but now--now it should save him! ... [skipped a spoilerish couple of sentences here] ... Fleur's future! 'I want fair sailing for her,' he thought. 'Nothing else matters at my time of life.' A lonely business--life! What you had you could never keep to yourself! As you warned one off, you let another in. One could make sure of nothing! He reached up and pulled a red rambler rose from a cluster which blocked the window. Flowers grew and dropped--Nature was a queer thing!"

There are eight (!) exclamation marks in that passage. A shocking thing! I was told by at least one writing teacher--advice I ignored--never to use them--ever. (Another said no dashes, and especially unpaired dashes. Oops.) It's pretty clear Galsworthy uses them to distinguish what are Soames' thoughts in free indirect discourse from the general flow of the paragraph. It's not the only thing he uses: repetition and dashes also function for that purpose: "very little--very little;" or "but now--now."

But the exclamation mark gives a certain breathlessness to Soames' thoughts. That may be OK in this passage. In the early part of the passage, we're told Soames' thoughts in something close to an authorial voice: "Impressed with the queer charity of that thought" or "he admitted it" or "dimly conscious." Later Soames' thoughts are actually quoted in words: "'I want fair sailing for her,' he thought." Also the use of exclamation marks builds up over its length so that most of them occur near the end of what I've quoted, at the moment of that rather symbolic rose. So well and good.

But Galsworthy uses exclamation marks to indicate everyone's interior consciousness in free indirect discourse! This isn't the only passage! So is everyone thinking breathlessly and excitedly? No--no, certainly not! Or, at least, not at all times! So, it's also a bit of a tick, one that I'm not sure Galsworthy has worked through and has entirely under his control. At the very least reading the Saga one needs to diminish in one's mind the significance of the exclamation mark.

Posts on the three volumes of the Forsyte Saga collected here. But for me there are still more Forsytes to go, (A Modern Comedy, et al.) and I will most definitely be going...